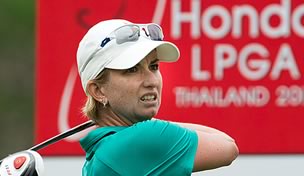 Webb was 10 under for the tournament through 14 holes, two ahead of another former world No. 1, Jiyai Shin (6-under 66) and her South Korean compatriot Amy Yang (8 under through 14).

The 2007 champion, Suzann Pettersen (67), was among a provisional group of three at 7 under, and defending champion and top-ranked Yani Tseng (65) led a group at 6 under, including first-round leader Ai Miyazato, who had five holes to finish.

Michelle Wie rebounded from an opening 75 with a 68 to sit at 1 under.

Webb was looking forward to completing the second round with 13 other women early Saturday at Siam Golf and Country Club.

The seven-time major winner had four successive birdies on Nos. 6-9 then made the fifth hole-in-one of her career on the par-3, 188-yard 12th. The last time she aced a hole was in 2008, in the third round of the Kraft Nabisco Championship in California.

Webb bogeyed the 13th, but birdied the 14th before play was stopped.

“It was a very solid day,” the Australian said. “Obviously put a great swing on a 6-iron on No. 12. I didn’t see it go in but the crowd roared when it went in off the green.

“I’m disappointed not to get finished today.”

Shin carded an error-free round of 66 to total 8-under 136, and the highest finished score in the clubhouse.

Countrywoman Na Yeon Choi was among those at 7 under, but had four holes to complete.

Tseng was relieved to salvage some pride with a formidable round of 65 after shooting a 73 on Thursday. Playing with her right elbow taped, she offset two bogeys by sinking seven birdies and finishing with a 7-foot eagle putt on 18.

“(On Thursday) I went back to the hotel really, really sad and very, very disappointed. I was crying. It was really bad,” Tseng said. “I told myself that I need to get back soon. I know that I can play well on this golf course and I know I can do this. I kept telling myself just focus on tomorrow.

“Today when I got to the golf course I felt great and I told my caddie, ‘Jason, I’m going to shoot 7 under and get back into the top position.’ And I did.”