Webb has DQ scare, but leads in Singapore 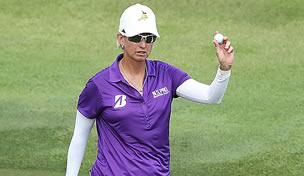 Getty Images
Inspired by "Gimmegate," the U.S. team came storming out of the gates during Sunday singles and shocked the Europeans, rallying from a 10-6 deficit to win the Solheim Cup, 14 1/2 to 13 1/2, the Americans' first win since 2009. U.S. anchor and captain's pick Paula Creamer finished off the biggest comeback in event history with a 4-and-3 win over Sandra Gal. (Getty Images)  -

SINGAPORE – Karrie Webb slipped up several weeks ago at the Australian Ladies Masters when she signed an incorrect scorecard and was disqualified. For a moment at the HSBC Women's Champions on Thursday, she thought she had made a similar mistake.

After shooting a 6-under 66 to take a one-stroke lead in the opening round, Webb feared she may have forgotten to sign her scorecard. She rushed back into the scoring tent only to find her scorecard was just fine.

''I've just had trouble getting out of the scorer tent since then,'' she said about her mistake in Australia. ''I walked out (today) and couldn't remember if I signed my card, which it would have been too late anyway.''

Caroline Hedwall and Paula Creamer were tied for second after shooting 5-under 67, a stroke ahead of 2012 champion Angela Stanford and Teresa Lu in joint fourth.

Disqualification aside, Webb is having a strong start to the season. A week after the ill-fated Australian Ladies Masters, she won her fifth Women's Australian Open title, and 40th overall.

The 39-year-old Australian has won seven majors in her long career, but none since the Kraft Nabisco Championship in 2006. Her results have been consistent, if not dominant, in recent years – she had six top-10 finishes on the LPGA last year and one win at the ShopRite LPGA Classic.

''I've had a good career and I feel like I want to finish in the fashion that I started,'' she said. ''I just continue to work hard, and my working hard now is probably a little different to my working hard 20 years ago, but it's still working hard.''

Webb birdied four of her first six holes on Thursday, then sank a difficult 15-foot putt to save par on the par-4 11th hole. Her only mistake on the green was a close miss on the 12th hole when her birdie putt from 2 feet lipped out of the hole.

Creamer has also had a fast start to the year, finishing tied for third at her first two tournaments – the Bahamas LPGA Classic and the Women's Australian Open. She's played well on this course in Singapore, too, finishing in third place here last year.

The American hasn't had a win on the LPGA, though, since her breakthrough victory at the Women's U.S. Open in 2010.

''My main goal is just to be very consistent this year and a win happens by itself, you don't have to force any of that,'' she said.

World No. 1 Inbee Park, who finished runner-up to Anna Nordqvist last week at the LPGA Thailand tournament, had a 2-under 70 and was in a tie for seventh with four others.

Park, the winner of three majors last year, could lose her top ranking to Suzann Pettersen this week if the Norwegian wins the event and Park doesn't finish higher than a tie for third. Pettersen had a 1-under 71 on Thursday for equal 12th place.

''It wasn't a bad putting day, but I hit the ball great today,'' Park said. ''And I didn't get myself in big trouble so that's good.''

Sixteen-year-old Lydia Ko struggled with her putting, making just two birdies and finishing at 1-over 73, tied for 27th place with Nordqvist, Michelle Wie, former No. 1 Yani Tseng and several others.

Ko is not the youngest in the field this week. Fifteen-year-old Singaporean Amanda Tan won a qualifying tournament in January to become the youngest-ever player at the HSBC Champions. She was in last place after a 7-over 79.