CASARES, Spain – Luke Donald will meet Martin Kaymer in the semifinals of the World Match Play Championship on Sunday, with the No. 1 spot firmly in their sights following the shock elimination of top-ranked Lee Westwood.

Westwood’s loss to Ryder Cup teammate Ian Poulter in the final 16 Saturday left him vulnerable at the top of the rankings, and his closest pursuers took full advantage on the Finca Cortesin course.

Second-ranked Donald struggled against Johan Edfors, needing a playoff to beat the Swedish outsider in the first knockout round. But he rediscovered his consistent beat to defeat Masters champion Charl Schwartzel by 2 holes in the quarterfinals.

Kaymer, the former top-ranked player who has slipped to third, won two of the last three holes to defeat local favorite Alvaro Quiros by 2 holes in the last eight. The German player eased past Soren Kjeldsen, 3 and 2.

Donald or Kaymer will become No. 1 if either wins the tournament on the Costa del Sol. The two met in the final of the Accenture Match Play in Arizona in February, with Donald winning, 3 and 2.

“I suppose I have the upper hand psychologically,” said Donald, who has never been No. 1 but has been a persistent challenger at the top of the rankings in recent weeks.

Belgium’s Nicolas Colsaerts, who is No. 108 and claimed a first European Tour title at the China Open last month, will play Poulter in the other semifinal.

But all eyes will be on the Donald-Kaymer match-up, especially with the bigger prize hinging on the result.

Donald, who said he felt “drained” while he struggles with the effects of a throat infection for two weeks, is arguably the toughest match-player around. He’s won his last 13 matches in that format, including those in the Ryder Cup. It has given the soft-spoken Englishman an intimidating aura out on the course.

“Being consistent throughout the bag is a useful tool in match play. I think in 18-hole matches you can wear your opponent down if it’s not too flashy, which sometimes might explain why I don’t get it done as often in stroke play,” Donald said.

Kaymer knows Donald won’t give him anything easy in the semifinal.

“He doesn’t make any mistakes,” Kaymer said. “I won with a few pars against Soren but that won’t happen tomorrow. The way Luke’s playing is fantastic.”

Westwood had been bidding for a third straight tournament win to consolidate his position in the rankings but slipped to a 1-hole loss against his Ryder Cup teammate, despite carding a 67 in stifling conditions.

He didn’t mince his words when describing his thoughts on the match and the general play of Poulter.

“You know he’s not going to hit it great but he’s going to make a lot of putts and get up and down from everywhere. He had a few breaks as well,” Westwood said. “That’s the frustrating thing about match play … sometimes it’s not reflective of how the players are playing.”

Donald would agree with that, acknowledging he “escaped” against Edfors after rallying from 2 down with three holes to play.

“If it was a strokeplay event, I probably would have played my way out of it. But that’s the art of match play,” he said.

Poulter rallied against Francesco Molinari to win the last four holes – which included birdies on the 16th, 17th and 18th – for a 2-hole victory over the Italian.

Colsaerts is the tournament’s surprise player. He beat two-time U.S. Open champion Retief Goosen and sixth-ranked Rory McIlroy in the group stages before defeating Venezuela’s Jhonattan Vegas, 2 and 1, and then No. 5 Graeme McDowell by the same score.

McDowell had beaten McIlroy, his friend and fellow Northern Irishman, 3 and 2, with surprising ease in the last 16. 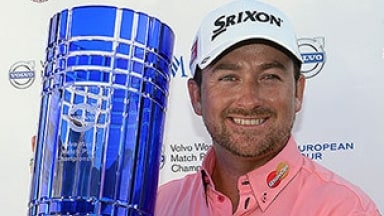 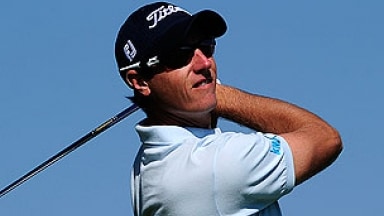 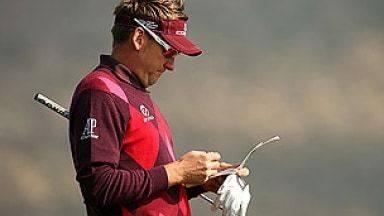