Westwood, Kaymer try to get back on track in Qatar 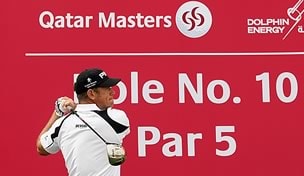 DOHA, Qatar – After forgettable performances in Abu Dhabi, third-ranked Lee Westwood and fourth-ranked Martin Kaymer are looking to get their 2012 seasons back on track with strong showings at the Qatar Masters.

They have chosen one of the most challenging courses on the European Tour’s desert swing to do it, however.

The Doha Golf Club just outside Doha is infamous for its windy conditions and this year will be no different. Forecasts are for winds to reach upward of 20 mph for much of the tournament.

Westwood struggled at the Abu Dhabi Golf Championship and finished in a tie for 17th. Nursing a sore shoulder and unable to master the greens, the Englishman was even par after two rounds. By the time he started playing better, including a 4-under 68 in the third round, he was effectively out of contention and finished seven shots behind eventual winner Robert Rock.

“I had a few sort of issues to negotiate,” Westwood said. “We’ve been working a lot on my fitness just recently, and I haven’t played a lot coming into Abu Dhabi. Didn’t hole as many putts or find the greens there, a little difficult to read.”

Still, Westwood said his showing was “a decent start” and he was feeling good about his game after closing out the 2011 season strong. He won the Thailand Golf Championship in December and the Nedbank Challenge a few weeks earlier. He had a third-round score of 62 at Nedbank, and opened Thailand with a 60 – the lowest round of his career – and then a 64 to beat Charl Schwartzel by seven strokes.

“The ball is starting on line where I’m aiming, and my pace control was good. I only made one bogey over the weekend. Unfortunately that was a three-putt from long range,” Westwood said of his putting. “I think I was second in greens in regulation, so my game is fairly sharp. Like I said, I’m a notoriously slow starter and it always takes me a bit to get going.”

Westwood said his shoulder is feeling better and he was eager to tackle the Doha course – a place he has had mixed success. His best finish is third in 2010 but he missed the cut last year and finished several times outside the top 30.

“Looking forward to this week and playing a golf course I’ve done well in the past,” Westwood said. “Apparently the rough’s not as long as it was last year, but the weather man says it’s going to be fairly windy. And when it’s like that around here, it’s a really tough test.”

Kaymer had an even worse showing in Abu Dhabi, where he was the defending champion and had won the tournament three times. The 2010 PGA Championship winner opened with a 77 which he blamed on bad putting and missed the cut after shooting a 1-over 73 on Friday. The poor performance comes in the wake of a disappointing 2011 season in which he won twice, but struggled in the bigger events.

Graeme McDowell, the 2010 U.S. Open champion, and defending champion Thomas Bjorn will also be in Doha and eager to build on their strong showings in Abu Dhabi. Both players finished in a tie for third.

Joining them will be Hunter Mahan, who becomes the latest American to make his debut in the Middle East.

Mahan said he was feeling good despite the long trip to the Middle East. Calling it something he wanted to do after hearing fellow players rave about it, the 19th-ranked American said the Qatar tournament offers him a chance to test his game against some of the world’s top golfers and also to immerse himself in a new culture.

“I think it’s somewhat beneficial, I think, to be an American player coming over here because it’s not all about golf,” Mahan said.

“I really enjoy the opportunity to kind of travel and see different parts of the world,” he said. “When it’s time to play golf, it’s time to play golf. But like I said, getting out of your comfort zone is kind of a good thing, kind of makes you forced to focus and bear down a little bit and make sure you’re doing what you need to do to prepare for the week.”