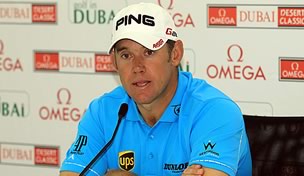 DUBAI, United Arab Emirates – Lee Westwood knew he was in trouble when his mother gave him a call after his final round at the Qatar Masters.

He was caught on television swearing after his tee shot on the 16th and the first person to call him on it was his mother. After his 3-under 69 put him in a tie for 12th, he said his mother heard the profanity and suggested he apologize.

“My mum was the first person on the phone, and she said, you might want to apologize,” said Westwood, who went on to birdie the 16th. “I didn’t think it formed a part at that stage of being on TV. It’s amazing how sensitive these microphones are.”

Westwood promptly turned to Twitter to do just that.

“Sorry about swearing on the 16th tee. Came off like a rocket and thought it was going further! Wash my mouth out! Perils of live tv,” Westwood tweeted.

Westwood, who is in the Emirates for the Dubai Desert Classic, which starts Thursday, refused to repeat what he had said, only that “there are worse words, actually.”

The third-ranked Westwood is one of the favorites in Dubai, partly due to his past success at the Emirates Golf Club course, including a second-place finish in 2010.

The 38-year-old Englishman, however, has had a typical slow start to the season – finishing tied for 17th at the Abu Dhabi Golf Championship and 12th in Qatar. But he insisted his game is taking shape and that his performance so far this season was “decent, good for me” when compared to past years.

“I’ve normally missed a cut by now, and thrown in a 60th-place finish or something like that,” Westwood said. “I’d say if I was making an appraisal of the first couple of weeks, I’ve hit it a lot better than I normally do. Short game is a little bit sharper than normal. Putts are quite nice, starting to roll a few longer ones in.”

But Westwood admitted he has been a bit rusty at times and that his short game can use some work. Even his 69 on Sunday was far from perfect, since it included four bogeys to go along with seven birdies.

“Just been sloppy, just early season sloppiness really, making too many bogeys and not making birdie when I should,” he said. “Wedge shots haven’t been quite as sharp as they ought to have been, not as close. So that’s the reason I’ve been sort of in the position I’ve been in.”

This week, several other big names will be in Dubai along with Westwood, including U.S. Open champion Rory McIlroy, fourth-ranked Martin Kaymer and defending champion Alvaro Quiros. So far, though, it has been the elder statesman and relative newcomers making a splash on the European Tour this season.

Brandon Grace, a 23-year-old South African, won two of the first three tournaments and then 117th-ranked Robert Rock outdid Tiger Woods to win the Abu Dhabi tournament. Paul Lawrie won the Qatar Masters, moving him into the top 50 after being 272nd a year ago.

“Like Robert has always looked a good player. It’s just a case of knuckling down and putting his mind to it, it seems with him, and he’s got obviously a very good game,” he said. “And he seems like the kind of player that, once he gets the knack of winning will win quite a bit, and seems pretty fearless playing in the company that is around him, as there was in Abu Dhabi.”