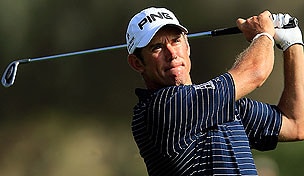 DUBAI, United Arab Emirates – Lee Westwood took advantage of some shaky play from Rory McIlroy and Thomas Bjorn to claim the third-round lead at the Dubai Desert Classic, one shot clear of Rafael Cabrera-Bello of Spain and two others.

Westwood was three shots behind McIlroy and Bjorn at the start of the third round but the quickly closed the gap with three birdies in his first four holes. The third-ranked Englishman birdied the 13th for a share of the lead with Bjorn and then went ahead by one when the Dane bogeyed the 15th.

“I played well. I got off to a good start. I was 3-under par after four (holes),” Westwood said. “The only time I dropped two shots was when I hit two poor drives on 6 into the left rough, got a heavy lie and 8 hit it into the sand on right. Other than that very solid and gave myself lots of birdie chances.”

With 21 European Tour titles, Westwood has much more experience than the next three players. Cabrera-Bello (70), Stephen Gallacher (68) and Marcel Siem (68) have a combined three titles.

“Yeah, I know how to play with the lead. What did I win, four times last year?” Westwood said with a wry smile. “When I get a chance, I’m pretty good at finishing off. I’ve won (38) times (worldwide). You know, that’s not somebody that’s not good with a lead. It’s a habit. You get used to it, you know. You get used to knowing what to do; when to press, when not to press, when to be patient.”

Coming into Saturday, it appeared Westwood’s biggest challengers this weekend would be U.S. Open champion McIlroy and Bjorn, who beat Tiger Woods in 2001 to take the Dubai title.

But McIlroy dropped back early, after his tee shot on No. 7 went in the water led to his first bogey. It was a sign of the kind of struggles he would have all day, as missed putts and errant drives led to three more bogeys on the back nine.

The 22-year-old Irishman did well to remain in the hunt, making three birdies on the back nine including on the 18th for a 72. Only two shots back, McIlroy said he had similar experience in Hong Kong where he shot a 65 to win the tournament, so he is confident he could still claim his first victory in Dubai since 2009.

“Today is just not going to be a day where you hit it well and you’re going to make plenty of birdies and give yourself opportunities,” he said. “A day like today, you just have to try to stay as close to the leaders as possible and not let them get away from you. That’s what we tried to do today and luckily I’m only two back which is a good thing.”

With McIlroy faltering, it appeared that Bjorn would take advantage and did so early on. He took the outright lead when he birdied No. 7 and consolidated the lead with another birdie on No. 10. But everything went wrong on remainder of the back nine, as a tee shot in the bunker led to a bogey on 15. He followed that with two more bogeys on his last three holes.

McIlroy is tied for fifth with 2010 PGA champion Martin Kaymer (70), Scott Jamieson (70) Joel Sjoholm (66). Bjorn (73) was a further shot back in a three-way tie for ninth with George Coetzee of South Africa and 2003 British Open Champion Ben Curtis.