Wie one back of Nordqvist after Round 1 in Thailand 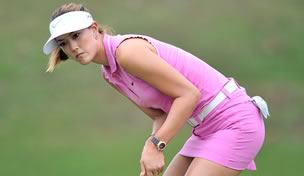 Getty Images
INCHEON CITY , SOUTH KOREA - OCTOBER 11: The United States team pose with the Presidents Cup after their 15.5 to 14.5 win during the Sunday singles matches in the 2015 Presidents Cup at the Jack Nicklaus Golf Club Korea on October 11, 2015 in Incheon, South Korea. (Photo by David Cannon/Getty Images)  -

PATTAYA, Thailand – Anna Nordqvist holed out from 60 yards for eagle on the par-4 15th hole Thursday and made a short birdie putt on No. 17 to take a one-stroke lead over Michelle Wie after the first round of the LPGA Thailand.

Nordqvist, the 26-year-old Swede who won both of her LPGA titles in 2009, shot a 6-under 66 on Siam Country Club's Pattaya Old Course. She eagled No. 15 after making two straight bogeys.

"Had pretty good yardage and it was on the top tier, so I just pitched it five or six paces behind the pin and spun back," Nordqvist said. "So, obviously, gave me some momentum to finish off. ... I just tried to stay in there after the two bogeys, because I didn't feel like I hit bad shots. I just got flyers out of the rough."

Wie had six birdies and a bogey in her 67.

"I birdied all four of the par 5s today, which definitely helps on this golf course," Wie said.

"It's definitely one of those golf courses," Wie said. "I don't get to use a lot of drivers during the year. This is one of the few golf courses that I get to just hit driver all the time. So it's fun."

Americans Angela Stanford, Lexi Thompson and Jennifer Johnson shot 68. Stanford had a hole-in-one on the 135-yard eighth hole. She used an 8-iron.

"It's kind of hard with hole-in-ones because you do get almost too high and you go to the next tee box and think, 'Oh, I have to hit another golf shot,'" Stanford said. "It's hard because it's like an out-of-body experience. Well, for me, because I haven't had many."

Second-ranked Suzann Pettersen opened with a 69, while top-ranked Inbee Park, the defending champion, had a 71 in her first start of the year.

"I think it was just like I didn't have much feeling that it was a tournament because it has been a while since I played a golf tournament," Park said. "I think I was a little bit nervous."

Nordqvist has a new instructor in Jorje Parada and changed equipment during the offseason.

"It felt like at one point last year I was about ready to quit golf," Nordqvist said. "I just kind of lost the reason why I play golf, the fun of it. I have good people around me now. They have been really helping me to get that inspiration back."