Wie, Pettersen two back at HanaBank 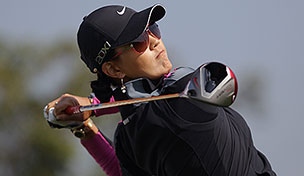 INCHEON, South Korea – Amy Yang overcame early jitters while playing in her home country, shooting a 5-under 67 Friday to finish in a four-way tie for the lead after the first round of the KEB HanaBank Championship.

With friends and family in the gallery, Yang had six birdies, including five straight beginning at the fourth hole. She was tied with Katherine Hull-Kirk of Australia, South Korean compatriot Ju Young Pak and Anna Nordqvist of Sweden. Another Swede, Caroline Hedwall, was a stroke behind.

''It's been a long time since I played in Korea, so I had a lot of family and friends around me,'' said Yang, whose lone bogey came on the first hole. ''So in the beginning I was a little bit nervous, but later on I had better concentration and focus.''

Nordqvist is trying to break a four-year winless drought.

''I feel like I put myself in a couple of good positions,'' she said. ''I just haven't really finished well.''

Michelle Wie eagled the par-5 18th and was at 69 with six others, including defending champion Suzann Pettersen and Brittany Lang.

Inbee Park, who leads the money list and the player of the year rankings, had bogeys on Nos. 12 and 13 and was at 70. American teenager Lexi Thompson, who won the LPGA Malaysia on Sunday for her second career title, shot a 71. Also at 71 was South Korea's Na Yeon Choi, who won this tournament in 2009 and 2010.

Since the tournament began in 2002, a South Korean has won seven of the 11 years.