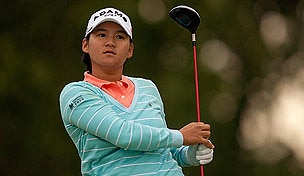 Getty Images
SINGAPORE - NOVEMBER 16: Padraig Harrington of Ireland hits from a bunker during the final round of the Barclays Singapore Open at Sentosa Golf Club on November 16, 2008 in Singapore. (Photo by Ian Walton/Getty Images)  -

ROGERS, Ark. – Defending champion Yani Tseng shot a 4-under 67 on Saturday and Amy Yang had a 64 to share the second-round lead in the LPGA Tour’s NW Arkansas Championship at 9 under.

The top-ranked Tseng, the LPGA Championship and Women’s British Open winner, leads the tour with four victories this season and has seven overall wins this year. Yang is winless on the LPGA.

Michelle Wie missed the cut with rounds of 78 and 72.