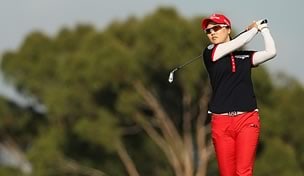 Getty Images
PRATTVILLE, AL - SEPTEMBER 25: Crisitie Kerr waves after making her putt on the 10th hole during first round play in the Navistar LPGA Classic at the Robert Trent Jones Golf Trail at Capitol Hill on September 25, 2008 in Prattville, Alabama. (Photo by Dave Martin/Getty Images)  -

MELBOURNE, Australia – U.S. Women’s Open champion So Yeon Ryu shot a 4-under 69 on Friday to take a one-stroke lead over fellow South Korean Hee Kyung Seo after the second round of the LPGA’s season-opening Women’s Australian Open.

Ryu, a playoff winner over Hee in July at the Broadmoor in Colorado Springs, Colo., had a 6-under 140 total on Royal Melbourne’s composite course, the 2011 Presidents Cup venue that is hosting a women’s professional event for the first time.

Seo shot a 66, the best score in the first two days of the tournament also sanctioned by Australian Ladies Professional Golf and the Ladies European Tour.

“It is very hard to play this great course,” Seo said. “I know it is not an easy course so I was nervous.”

American Jessica Korda, England’s Melissa Reid and Paraguay’s Julieta Granada also were 4 under. Korda had a 70. Her father, Petr Korda, won the 1998 Australian Open tennis title. Reid shot 71, and Granada had a 72.

Ryu works with Australian instructor Ian Triggs. “He is a coach, but feels like a father,” she said.

“Sometimes I lose concentration and he wanted me to feel the putts on the putting green,” Ryu said. “I practiced just feeling putts. Sometimes, if I am really nervous, my routine is so fast. I just slowed down and really focused on my ball.”

She tied for second last week in the Australian Ladies Masters at Royal Pines, a stroke behind the Netherlands’ Christel Boeljon.

“I think the reason was that I really wanted to win the tournament,” Ryu said. “I think it was really high expectations of myself. I was thinking about winning and the trophy and maybe I lost concentration.”

“He is not just a caddie for me,” Seo said. “He is like a brother, a dad sometimes, a friend. He makes me really comfortable all the time. Sometimes he pushes me hard. Not on the course, but in training. I am very happy and very thankful for him.”