Woods shoots 63, trails by one in Turkey 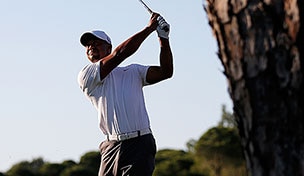 BELEK, Turkey – Tiger Woods shot a 9-under 63 Friday to trim a six-shot deficit to one after the second round of the Turkish Open.

Woods completed seven holes of his rain-delayed first round for a 70 on Friday morning. After an hour lunch break, the 14-time major winner didn't drop a shot and had nine birdies in the second round.

It left Woods in fifth place on 11 under, just a shot behind the leading foursome of Sweden's Henrik Stenson (68), England's Ian Poulter (66), Frenchman Victor Dubuisson (65) and South African Justin Walters (66).

''I played a little better certainly this afternoon and made some putts, so that was fine,'' Wood said. ''It was a round that could have been really special. But I am right there, and I am only one back.''

Woods, who last won on the European Tour at the co-sanctioned 2009 Australian Masters, said he missed four or five putts within 10 feet for birdie.

''It's a bunched leaderboard, so we are going to have to continue to go low over the weekend given the way the golf course is playing and how soft it is,'' he said. ''It is so receptive and slow and it lends itself to a lot of birdies.''

Woods revealed he had been awake since around 3:30 a.m. local time watching TV coverage of his alma mater Stanford beating Oregon 26-20. The game went on so long that Woods became worried about getting in some practice at Maxx Royal before his 8 a.m. restart.

''Unfortunately, I had to stay longer watching the game than I wanted to,'' he said. ''It was one of those games where it looked like we (Stanford) were going up 29-7. But the next thing you know, Oregon comes back at us.

''I'm thinking I have to go warm up for this tournament. So I'm saying, 'come on guys, can't you just run the clock out' and they finally did.''

Stenson, the European Tour money leader, had nine straight pars before picking up four birdies over his last nine.