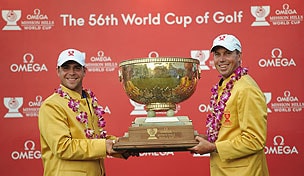 Getty Images
SYDNEY, AUSTRALIA - DECEMBER 13: David Smail of New Zealand plays an approach shot on the 2nd hole during the third round of the 2008 Australian Open at The Royal Sydney Golf Club on December 13, 2008 in Sydney, Australia. (Photo by Brendon Thorne/Getty Images)  -

HAINAN, China – Matt Kuchar and Gary Woodland ended the United States’ 11-year drought in golf’s World Cup by shooting a 5-under 67 on Sunday to win by two strokes.

The American pair fired six birdies in the alternate-shot final round at Mission Hills Blackstone course to finish on 24-under 264 overall, notching the 24th U.S. win in the history of the tournament.

English pair Ian Poulter and Justin Rose had the final day’s best round with a 63 to tie for second at 22 under with Germany’s Martin Kaymer and Alex Cejka (69).

Ireland’s Rory McIlroy and Graeme McDowell led by two strokes going into the final round but could only manage an even-par 72 to finish joint fourth with Australia, the Netherlands and Scotland.

The American victory was the first since Tiger Woods and David Duval claimed the title 11 years ago. The event was annual up to 2009, and this year’s tournament was the first in the new biennial format.

“We really clicked. It’s fantastic to win for the U.S.,” said Woodland.

The U.S. duo built a two-stroke lead over Germany from the halfway stage and after a rare slip with a bogey at the par-3 11th, the Americans responded with birdies on the next two holes and then pars the rest of the way to claim victory.

“Undoubtedly the shots on the 12 and 13th were key. It was a great moment and to shoot a par when you expected a bogey,” said Kuchar.

England seemed well out of contention heading into the final day eight shots off the lead, but soared into contention. However they needed more than one of the leading teams to falter. Instead it was only Ireland which came back to the field.

World No. 2 McIlroy was well below his best, fluffing a series of shots, including a putt on the 18th which would have given Ireland a share of the runners-up check. The tournament favorites had a run of misfortune, including a penalty stroke on the 6th and four bogeys on the card.

They shared fourth with Australia’s Richard Green and Brendan Jones (69), plus Scotland’s Stephen Gallacher and Martin Laird (66) and the Dutch pairing of Robert-Jan Derksen and Joost Luiten (68).

Like Ireland, South Africa also had a pair of major winners who faltered on the final day, with Charl Schwartzel and Louis Oosthuizen only able to record a 74 to quickly drop out of contention.

Defending champions Italy, represented by Edoardo and Francesco Molinari, also had a final-round 74 to finish 17th, 10 shots off the winning score. 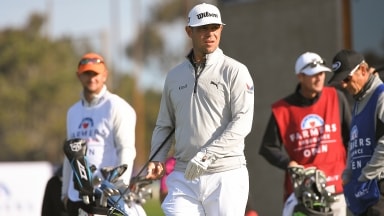