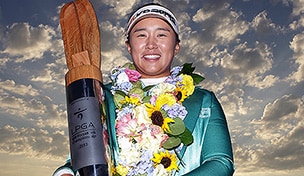 Getty Images
Chris Doleman hits the driving range to practice before the first day of competition.  -

Michelle Wie, who started the final round tied for 22nd, surged up the leaderboard with six birdies for the day's lowest score of 66.

Wie finished tied for third at 8-under 208 with defending champion Suzann Pettersen of Norway (70) and South Korea's Sei Young Kim (69).

Yang sealed the win with a 15-foot birdie putt on the par-5 18th hole at the Ocean Course in Incheon.

''I've been waiting for this championship for a long time, and I'm really happy to get it in my home country,'' said Yang, who has been a member of the tour since 2009. ''I still can't believe it.''

The 24-year-old Yang began Sunday's final round trailing co-leaders Katherine Hull-Kirk of Australia and Anna Nordqvist of Sweden by one stroke. The South Korean stayed near the top for most of the round and surged into a tie for the lead after an eagle at the par-4 15th moved her to 8-under for the tournament.

Yang saved par on the next two holes and birdied the par-5 18th to force a playoff with Seo as both players finished at 9-under 207.

Wie was pleased with the progress of her game.

''I feel like my game is finally coming together slowly,'' Wie said. ''I have just been patient with my game and working hard at it. It's just nice to see that it paid off this week, and hopefully I can finish strong next week.''

Nordqvist shot a 74 that left her tied for eighth. Hull-Kirk had seven bogeys en route to a 80.

South Korean star Inbee Park, who leads the money list and the player of the year rankings, shot a second-straight round of 73 that left her tied for 28th.

Since the tournament's first year in 2002, a South Korean player has won the title eight times.

The next tournament is the Sunrise LPGA Taiwan Championship on Oct. 24-27.