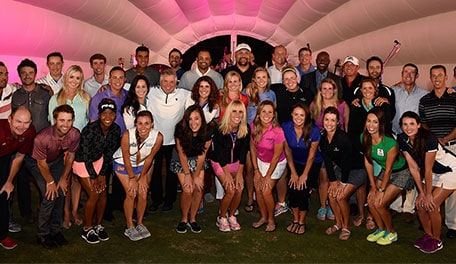 LAKE OCONEE, Ga. - You know “Big Break” as the pressure-filled, high-stakes drama, perform or pack-your-bags reality competition that’s aired on Golf Channel for 21 seasons. But this week, “Big Break” gets even bigger.

Forty former contestants – 20 men and 20 women hand-picked based on their dynamic personalities and success since debuting on the show – will go head-to-head in full tournament conditions in the inaugural Big Break Invitational Reynolds Plantation at the Great Waters Course at Reynolds Plantation in Greensboro, Ga. (Click here for the full field.)

The four-round tournament (Tuesday through Friday) will feature a Modified Stableford format for the first two rounds, followed by match play in the third round and a stroke-play conclusion to determine the champion.

“It’s an honor,” winner of the very first “Big Break” Justin Peters said. “This is pretty awesome. I was part of the very first ‘Big Break’ 11 years ago, and to see how much it’s grown over 20 seasons is amazing, and to be involved in the Big Break Invitational here at Reynolds Plantations is pretty amazing.”

Peters is among fifteen former “Big Break” champions in the field this week. Others include current PGA Tour and LPGA professionals, NFL Hall of Famer Jerry Rice and once-was players who are just happy to have received the call … and the consideration.

“I had to be one of the last guys to get the call,” Kip Henley, “Big Break” winner turned professional golfer turned PGA Tour caddie, said with a chuckle. “I’m just so happy to be a part of this. The Golf Channel treats us like kings. I did not want to miss this. It’s so important for me to be here and I’m as happy as I can be.”

Make no mistake, this week is a departure from glass-breaking and immunity challenges, and is, instead, about serious golf – and serious cash: the winner scores $100K. But, there’s still a premium on fun, entertainment, and made-for-TV drama.

For evidence of that, look no further than the Henley-Don Donatello opening-round tee time.

“I’m paired on Tuesday with Kip Henley who beat me (on the second season of “Big Break”), so there’ll be some banter back and forth, I guarantee it,” Donatello said.

Henley beat Donatello in a playoff in season two, and the two are now caddies on the PGA Tour - Henley loops for Brian Gay and Donatello spent the last two years on the bag for J.J. Henry. The playoff was intense, and it has provided fodder for the two in the years since.

“It wouldn’t matter if the Pope was playing with Donatello,” Henley said, “there’d be some banter back and forth. Double D is the king of the lip wedge and I’m ready for him. You gotta go to bed thinking about how you’re gonna handle Double D. He’s my buddy, I love him, but he’s unique with the lip wedge. He’s a plus-two handicap.”

Henley-Donatello won’t be the only pairing to tune in for. Also playing together are Blair O’Neal and Taylor Collins – both former champions of Big Break; Jerry Rice and Isaac Sanchez – teammates on “Big Break” NFL; and Gerina Piller and Kristy McPherson – both former U.S. Solheim Cup team members (2013 and 2009, respectively).

“I feel like my experience (on the LPGA and Solheim Cup) will be an advantage,” McPherson said. “I’ve been on tour for a long time now and have gotten to play on the big stage. … You can’t discredit anybody and you can’t count anybody out.”

Going head-to-head with a rival is one thing, but for Mallory Blackwelder and Julien Trudeau (pictured above), this week's format could hit a little closer to home. The two met on “Big Break” Ireland, started dating after the show's taping concluded and got married this past weekend in Kentucky. They're on their “honeymoon” this week, but if they’re pitted against each other in the final, it could be a short union.

"It'll be a coin toss," Trudeau deadpanned, when asked if his marriage could survive Blackwelder beating him. But more seriously, he said, "If we both make it to the final, we walk away with $150K, collectively. So that would be great."

Whether it's official familial ties or those of the metaphoric type, the "Big Break" bunch is one happy family and excited to be reunited this week in Georgia.

“’Big Break’ is kind of like a big family,” Donatello said. “It’s just a big ‘ol family out here and we all want, for 'Big Break,' for us to play well – the ladies to play well, the men to play well because it looks good for the show.”

When forty men and women tee it up at the Great Waters course on Tuesday, there will be no glass breaks and no wall flops. That much has changed. But one thing is certain, it's guaranteed to be must-see TV.