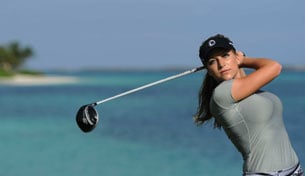 Hi everyone, first off, thank you so much for all of your support on Big Break Atlantis.  My journey in professional golf is just beginning, and I am excited to see what the next chapter has in store for me.  I wanted to take some time here to share with you a little behind-the-scenes on my time in Atlantis competing on Big Break:

The morning of my trip to the Bahamas, I arrived at the Ontario Airport in the AM before the sun came up to board a flight that made two stops before arriving at Atlantis. I noticed Selanee Henderson, but we don't make the the connection until the 2nd flight to Florida, where we also ran into Christina Stockton. Three Californian girls flying to Florida not knowing what to expect.

Running from the opposite side of the airport for our flight to make our connection with one minute to spare, there we met Allison Micheletti and Kelly Villareal. At this point, I was super nervous and didn’t know what to expect from the girls, but so far so good, everyone was nice! We arrived to cameras following us after flying all day into the night. We then met the rest of the competitors to find everyone has their own unique personality and beauty.

The next couple of days we played a practice round and did photo shoots for the Big Break. Shannon Fish and I connected right away and we rode together forthe practice round, playing alongside Natalia and Kelly. In between waiting on holes we practiced flop shots landing just over the cart and landing on the cart.We all hit it off.  I was really nervous being the youngest female competitor.  Some of my competition had up to 10 years of experience.  All the girls were very welcoming and nice. We all got along and separated competition from friendship.  So much was on the line that everyone knew you had to do what you had to do to win because this was a once in a lifetime opportunity.

The night before the first day of competition I read some key points I highlighted in Zen Golf and I practiced my putting stroke in the hotel room. With many racing thoughts in my head it was hard to sleep. Every time I had a thought I would journal it in a notebook and brought it to the course to remind myself that I can do this! Not knowing what to expect, I arrived at the breakfast table. I didn't talk much at breakfast because I was trying to figure out a game plan in my head even though there was no way you can plan for Big Break.

We arrived at the range being told to practice a punch shot. I started practicing and I was very confident in the punch shot. I found out I was going up against Marcela. It was Marcela's birthday and I think I started psyching myself out with that.  I'm not usually superstitious but when I’m nervous I start thinking of these things. It also was tough knowing I was going up against someone with a lot of experience.  I told myself to not worry and that greater things in life have happened to people who were told they never had a chance.

The breaking glass challenge started and it was super exciting!  When the challenge started I completely forgot about the cameras. It came to my turn and I hit the post right below the glass. I was so bummed because the window was open and all I could do was wait.

Usually when I have to play under pressure I perform much better.  I felt that when I was competing in this challenge, it was happening so fast that I didn't feel enough pressure. It was almost too surreal to be happening that I didn't get myself in the moment. I was thinking of too many different things and not focusing on the shot at hand.

Marcela hit the glass and my heart dropped because it made it real that I don't get to hit the glass. I was so mad at myself at first for not taking more time. The glass break was much different than I thought because I thought I knew my trajectories with my clubs.  When I stepped up to the glass it was like I couldn't judge which club went high or low enough for the glass. This challenge showed me that I need to process my thoughts and visualize the shot in more detail.

The next challenge was from 75 yards. I was 2nd to last to go and I had no idea what everyone else was hitting or doing in the challenge. I felt more tension amongst each other and no one was laughing or smiling at that point.

Before the challenge started I only grabbed my wedges which I later regret. The wind was blowing the ball left about 20-30 yards. I play a draw and I underestimated the power of the wind. What I should have done was do something similar to the breaking glass challenge and hit a low punch shot up onto the green to make easy points. Yet again, I don't believe I put enough pressure on myself to perform. I kept thinking there will be more challenges, but the challenges ran out. My experience with the challenges taught me to take my time with every shot and be even more precise with my target. Now I make my targets so precise that my target is about an inch big. Aim small miss small right!

By the time Big Break became real to me I was already in the Elimination Challenge, so I began to perform. I did all that I could but Selanee just hit an amazing shot. What people don't realize is how great her shot was.  To make that shot in the Big Break is a completely different level compared to a normal round or a normal tournament. Kudos to her.  I made par but she made birdie. One shot made you or broke you. Tears and hugs later I was separated from the group and a contestant all alone.

That night I grabbed two left over dessert trays with a variety of options and I ate them all that night. Ha ha. The next day I was really bummed but then I thought about how lucky I was to have been given the opportunity and it just motivated me to work harder. To succeed you must fail a few times. It's not about today it’s about tomorrow. This will be a process and a transition but I will not give up! Big Break taught me how to deal with a new kind of pressure which has matured my golf game. Since the Big Break I have improved my swing to be mechanically better and learned to live in the present. The Big Break and Two Dessert trays later I am working harder than ever before and my journey is to be continued....