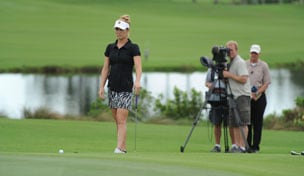 There’s nothing in a caterpillar that says it’s going to be a butterfly.  To go from a furry worm lookin’ thing, to a colorful, fluttering, fully realized insect is a pretty amazing thing.  What’s interesting to note, though, is that once that drastic change occurs, one never really considers the effort it must have taken to get to that point.  Think about it.  When was the last time you looked at a butterfly and thought, “ya know what’s crazy…that used to be a caterpillar.”  George Carlin may have summed it up best when he said, “the caterpillar does all the work, but the butterfly gets all the publicity.”

Welcome to the incoherent thoughts and ramblings about this penultimate episode of Big Break Atlantis, courtesy of Big Break’s Senior Producer, Brendan Havens.

Instead of focus on the very fun, yet ultimately pointless prize challenge which highlighted the all too brief return of the entire cast of Big Break Atlantis, I’m gonna go in the completely opposite direction.  Let’s talk about the butterfly of the cast, shall we?

I hope all of you can fully appreciate what you’ve all been witness to over the last 10-weeks as we are currently in the midst of a turnaround in which I’ve never seen on any Big Break series I’ve ever been involved with.  Selanee has transformed from a caterpillar to a butterfly right before our eyes and it’s happened in an astonishingly quick period of time.  I say this because in TV time, this has taken a full 10-weeks to happen.  In reality, this happened over the course of roughly 10-DAYS.

As it’s been chronicled in past producer blogs, this series takes right around 2-weeks to shoot.  The contestants arrive, get a full day of practice to get familiar with the course, the show open elements are shot, and then the actual competition begins filming with 1 show being shot per day.  Usually, in this compacted period of time, the competitors kind of come with what they got and hope that it’s good enough to get ‘em through the series.  There’s really no time to necessarily figure things out and work out the kinks, so to speak.  This is what makes this progression of Selanee’s self realization that much more impressive.  She’s gone from being flat out scared, to being the flat out scariest competitor in the entire competition.

As Scott Lee detailed in his blog last week, we each have interview assignments at the end of every day.  As a general rule of thumb, you stick with the same contestant as long as they’re on the show.  It builds a comfort level and the interviews benefit greatly from both sides being able to have a comfortable conversation.  I drew Selanee from the start, so that meant as long as she stuck around; we’d have a nice little chat at the end of every day.  To experience her daily evolution first hand was pretty amazing.

Remember, Selanee was one-hole-of-golf away from being eliminated in show 1.  Remember that she backed off that 4-foot birdie putt 4 times before getting her hands to stop shaking so violently that she couldn’t even pull the putter back.  Remember that only 3 shows later, she found herself in the same position against Aubrey, only to fight back the nerves once again and birdie another hole in elimination (whist hands shaking again).  Remember the opening birdie and AMAZINGLY clutch up and down to eliminate Christina.  And now, as we all sat back and watched Selanee completely destroy a very game Gloriana to make it to the championship match, take in the beauty and make sure to marvel at how we even got to this point.  Just like the butterfly, Selanee has awoken in her own time.