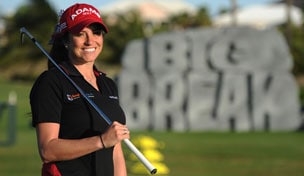 During this past off season, I was contacted by Golf Channel about doing a guest appearance on the upcoming season for the TV series Big Break.  I was told that the show would be filmed in the Bahamas at the Atlantis Resort and that I would have to fly out and spend 2 days there.  Well it didn't take long to convince me to take a trip to the Bahamas.  I told them they could count me in.

I was excited going back to the Big Break, mainly because I knew what to expect.  As a contestant you really don't know what your schedule will be from day to day.  Sometimes you don't even know what you'll be doing in the next 15 minutes!  But this time, I would be well prepared for what is to come.  I went from being a camper to being a counselor.  When I was on Big Break Prince Edward Island, I knew nobody going into the show.  Even the people working on the show kind of avoided you.  It was a very lonely feeling.  This time, I was reunited with the production crew and I received a very warm welcome.  One thing I didn't miss about the show was the early wake up calls.

The day we shot the show we started early.  I ate breakfast and got ready for the day, but I had to be careful not to be seen by any of the contestants on the show.  Big Break likes to keep its contestants in the dark about what they will be doing each day and that includes who will be there with them.  I even had my own cart driver to make sure we didn't run into any the contestants.

By the time I made my way to the golf course, the cameras had already started running.  The hosts of the show got me into position and then introduced me to the contestants.  I remember being very shy and reserved my first time on the show.  This time, I was very comfortable with the spotlight and I really tried to soak it all in.  I could tell the other girls had been in a tense environment being on the show and I wanted to do whatever I could to help loosen up the mood.  When I had time, I tried to get to know the contestants and make them feel comfortable.  I told them to just play your game and be confident.

There were a lot of similarities between when I was on the show and now but there were also some differences.  One difference was the first challenge.  We played a 'Tic Tac Toe' challenge which involved pitching the ball into a series of nets that were about 5 feet wide.  It was nice because we have essentially the same nets at the course I practice at in Dallas.  Needless to say, I was well prepared.  It was nice doing the challenges because I was actually helping them and not playing against them.  The better my shots were, the more points they were given.

I was very thankful for the opportunity to return to Big Break and the show has helped me learn to deal with pressure situations as well as give me confidence in my game.  A big thanks to Golf Channel for having me as a guest.  I'm proud to be a Big Break alum and hopefully I'll be back on the show in the future.  Good luck to the remaining contestants and we'll see the winner later this year in Virginia.

Thank you for taking the time to catch up with me and for all your support.