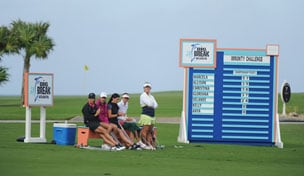 When casting a Big Break series, the first goal is always to find a group of men or women with golf talent.  With Tour exemptions, cash and prizes up for grabs, you've got to be able to flat out play.

After that it's a bit of a chemistry experiment.  The game is predicated on golf, but it's driven by personalities, and the right mix can make for compelling drama.  Big Break Atlantis is no different from any other season in that regard, and episode six provided a perfect representative sample of players' personalities rising to the forefront in the heat of competition.

The first Immunity Challenge was won by Gloriana, the somewhat demure Costa Rican with the simmering fire just beneath the surface.  In true form, she played the three locations the most consistently, earning immunity while still managing to demand more of herself.

The next Immunity Challenge was highlighted by Kelly, who was called out by Marcela and took on the Championship Points leader with the same flippancy that saw her advance through the first five episodes.

Is Kelly crazy like a fox?  Or just plain crazy?  Her declaration of ten feet as the target distance in her match against Marcela -- and the subsequent shots to gain immunity -- should be all the evidence you need.

Which raises a point: the beauty of working on the Big Break is that you don't have to root for anyone. (Of course it helps that it's pretty much illegal.)  We root for good golf.  And when Kelly hit that shot inside ten feet, it was sweeter than all the tea in her native Birmingham, Alabama.

That led to the Elimination Challenge, which pitted Anya, Allison and Marcela against one another for survival.  Talk about story lines.

Anya should serve as an inspiration to basically any human with a beating heart.  After overcoming sexual abuse during her childhood, Anya knows about surviving in the most literal sense; the battles she faces on the golf course are inconsequential in comparison.

Yet it was telling that, in the midst of her tete-a-tete (a-tete) with Allison and Marcela, Anya's thoughts went to the children and families that could benefit from hearing her story, even if for just one more show.

Marcela, on the other hand, has a different tale of perseverance.  A journeywoman pro -- a term most casual golf fans don't hear too often -- Marcela has eked out an existence on mini-tours for more than a decade.  One flash of her infectious smile lets you know she'd have it no other way.

Still, the early favorite found her way into the Elimination Challenge, proving that there's no such thing as a sure bet in Big Break land.  She handled adversity with grace under fire, and showed even more graciousness in victory (was her closing birdie merely coincidence?).  Marcela left her deflated opponent with both wisdom and a sense of optimism.

Which brings us to Allison.  A consummate athlete, hers was a classic case of running out of gas.  Regular Big Break Atlantis viewers will note that Allison was on the brink of elimination as early as episode two.  Arguably, she made it this far on sheer determination.

Allison struggled to find her game against Marcela, and maybe it was because she felt no margin for error against the sturdy veteran.  Sometimes it's hard to play your best when you feel that's exactly what you have to do.

It's easy to see why we root for good golf.  After all, in many ways each of these competitors has already won.