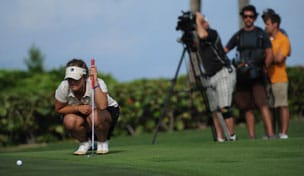 I remember an Aaron Sorkin show called Studio 60 on the Sunset Strip. The show’s action revolved around a creative crew of writers and producers building a weekly sketch comedy show. Each episode featured a countdown clock that was counting to the start of the show. At the end of each episode, the clock would reach 0, and be reset to begin counting down the hours to the next show. Reality television has something of that on a much longer time span. Our shoot is 3 weeks of 20 hour days surrounded by 80-90 crew and cast members. That is followed by 4-5 months of hermit-like existence in an edit suite with just my editor for company. Basically we could hop on a spaceship and fly to Mars in the time it takes to cut a season of Big Break!

While my editor spends the first week prepping a show, I’m going through hundreds of pages of interview transcripts looking for 3 second long sound bites that will eventually narrate the action. I also spend some time downloading any specific production music that I might need for that particular episode. At this point in time, I have pool of over 900 tracks in the system, of which we might use 50-70 in any given episode.

Then we spend a few weeks cutting contestant sound into the action of the challenges, and spinning out any dramatic beats we want to build. Adding the show’s music takes another week. Next we cut cameras, take a first “last look,” and send it to the Executive Producers to get notes. While we’re waiting on the notes to come back, my editor will usually color correct the show, and we’ll do the graphics pass. Major titles and credits are pre-built by the graphics department, but all the show specific fonts with scores have to be built and rendered in our edit suite. After we make any changes the Executive Producers have requested, we call video lock, and send the show to audio. During the 3 days or so that the show is in audio, we’re prepping our next show. Once audio is finished, I watch the show with our audio mixer and make any last tweaks that the audio mix might need. After our mix is printed, we bring it into Avid, and marry the tracks to our finished video. We watch this version to make sure the audio mix printed correctly, and to do a last check of graphics to make sure all the scores are right, and that we don’t have any artifacts from the graphics render.

Finally, the show’s ready to be sent to our air system, NEXIO. It takes real time to kick the show out to NEXIO, at which point I’ll watch the show on the air system one last time to make sure that we didn’t introduce any artifacting during the push, because this is the final product that everyone at home is going to see. For those of you counting along at home, I’ll watch each episode a minimum of four times before it airs, although realistically it turns out to be more in the 6-8 range. Once a show is delivered, there’s a good day’s worth of paperwork to get done, or to delegate to our interns, and then I’m ready to start working on the next episode. Repeat four times and you have a TV series.

Hope you enjoy it!