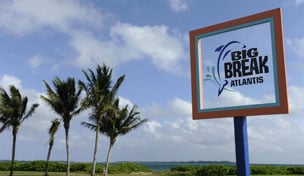 Getty Images
An all-female cast of the 17th season of Big Break takes on the beautiful Atlantis, Paradise Island in the Bahamas  -

As a 21-year-old Senior at the University of Connecticut, I had not yet embarked on that prototypical “SPRING BREAK!!!” type of trip.  As a precocious young college kid, I always aspired to do such things, but alas, it was not to be up to that point in my quest for higher learning.  I was not a child of trust funds who was allowed a trip to Cancun every spring since the day their parents dropped them off for freshman orientation in their Sweet-16 Beemer.  Nope.  That was not in the cards for me and my circle of friends.  Going into our final year of our college careers, our lone Spring Break trip consisted of piling into my parents’ mini-van for 2 nights of north-of-the-border fun in the toasty tropical surroundings of…Montreal.  At that time (the pre-millennial year of 1999), the U.S. dollar was still worth something up there, which helped significantly.  Our shoestring budget appreciated the extra 30-cents on the dollar.  And as the kids have done for generations, we reveled for the better part of 48-hours in our obnoxious, collegiate, American-ness.

Although Montreal did prove to be a great success (especially discovering the Duty Free shop at the border), the following year, a few of us started talking about doing something other than freeze our butts off for our final Spring Break trip together.  Outside of the occasional trek down to Misquamicut, Rhode Island for a day at the beach during the summer, none of us had ever really escaped the clutches of the Northeast for some good ol’ fashioned tropical fun in the sun.  Then along came our tech-savvy dorm-mate who introduced us all to expedia.com.  In the burgeoning age of the internet (it was just beginning to take hold as a viable medium during this time), this was amazing.  You mean we can find discounted airfare AND cheap hotel rooms without having to pay a travel agent?!?!?  JACKPOT!!!  So, after some intensive research (and numerous stop-downs due to the modem being knocked off line) we found that Nassau, Bahamas was actually a very affordable trip.  So, we booked some cheap airfare, booked a few rooms in a…ahem…“hotel” and off we went.  (Not surprisingly, our lodging of choice for that weekend has since been demolished and the beach area across from it has been built up quite a bit and renamed as Junkanoo Beach.)

After a day of sun, fun and local rum, we got word of this new resort that just recently opened over on Paradise Island.  It was called “Atlantis” and it had shark tanks, waterslides and a casino.  So, we did what any educated person would do upon hearing of such a thing: packed up a bottle of rum, got in a cab, and headed to the lost city of Atlantis.

Our wide eyed enthusiasm, I’m sure, was palpable by any of those unfortunate enough to be in our vicinity upon arrival.  I mean, dude…there were shark tanks and a casino.  So after spending some quality time out on the beach (where The Cove Atlantis now stands), we made our way into the casino, found a $5 blackjack table ($10 is now the minimum) and took our 1st step toward procuring some extra funds for the rest of our weekend.  Now keep in mind, up to that point in my life, I had never even set foot in a casino.  I was also, as mentioned earlier, on a part-time-college-job type of income.  Every dollar down on the table meant one more bead of sweat trickling down my nervously furrowed brow.  First, I lost the $40 in my pocket.  It was then that I faced the all important casino decision for the 1st time in my life.  Play, or walk away.  Well, being the rookie that I was, I took another $40 out of the ATM and went right back to the table, determined to take back what was rightfully mine.  After another quick $20 donation, I learned my lesson and departed the table with my last $20 and a bruised ego.

Now, some 12-years later, as long-time Series Producer of the Big Break franchise, I’ve definitely experienced my fair share of casinos and tropical locales (Big Break II Las Vegas, Big Break V Hawaii, Big Break Ka’anapali, Big Break Sandals Resorts).  One could say that wide-eyed enthusiasm would wane over the years.  I mean, just like anything; once something goes from “out of the ordinary” to just “ordinary” it just becomes normal.  While I certainly don’t garner that same feeling I had when first visiting Atlantis, there is one thing that always seems to bring it back.  That moment when the contestants arrive on site.  They’re all, not only, experiencing the very beginning of a competition that can change their lives, but most are experiencing the location itself for the 1st time.  That’s what makes the start of this series that much more exciting for me.  The looks on their faces when they pull up to Atlantis bring back that same feeling I had when I first witnessed it 12-years ago.  Granted, I wasn’t about to compete on a TV show, but I was experiencing something I had never experienced up to that point of my life.

Even the feeling I had that afternoon in the casino most certainly translates to the types of challenges we’ve conjured up for this season.  So much of what they will face during the course of the competition, will be based on their decision making ability, not just their golf game.  Like my 1st foray into the world of casino gambling, these ladies will have to determine during many of the challenges…play, or walk away.

As for the copious amounts of local rum we “experienced” during our one and only tropical Spring Break…well…considering what we have in store this season…these ladies may need plenty of it.