What Flavor of Drama Do You Prefer? 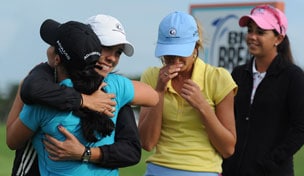 Brendan Havens here, with another mind bending, thought provoking, sometimes sleep inducing round of my incoherent thoughts and ramblings about this week’s episode of the greatest (only) golf reality competition series around:  Big Break Atlantis.

If you’re a fan of tense, clutch, straight up dramatic competition, it really doesn’t get much better than what the ladies put forth this week.  You had Marcela, the reigning Championship Points leader, on the ropes; Christina holing putts from everywhere; Selanee making yet another birdie when it really matters (not to mention taking another huge step toward curing her anxiety); and, of course, there’s that little putt Kelly managed to drain in the Elimination Challenge and Anya answering with that 5-foot knee-knocker.  I’m breaking out in a cold sweat just thinking about it!  Ok, maybe that’s a bit of an exaggeration, but it was still pretty awesome stuff.  But, being the cerebral kind o’ dude that I am, this goosebump-creating Big Break style of entertainment got me thinking.  Is this the best/most popular type of drama the Big Break franchise has to offer?

As I’m sure you’ve all noticed, there is a certain lack of childish, catty, backstabbing with the cast up to this point in the series.  There actually is a genuine camaraderie between these contestants and even though they all want to win, they are rooting for each other to do well.   Now, I know this isn’t the usual formula for typically successful reality entertainment, but does that make it not as entertaining?  Since this type of television permeated pop culture with the advent of The Real World and Survivor, the key to their success (and those that have followed) has been that interpersonal in-fighting that the general public just can’t seem to get enough of.  As you diehards can attest, Big Break certainly has not been immune to (pun intended) this “train wreck” type of fascination of people arguing with and insulting each other.

During the course of the 17 seasons of Big Break there’s been a bit of a mixed bag of drama.  There have been seasons entirely dominated by bickering and backstabbing (Big Break III and Big Break Dominican Republic immediately come to mind).  On the other hand, there have been numerous seasons where the words of the late Rodney King were taken to task and everyone just got along.  It was the competition itself which served as that much needed antagonist (most recently Big Break Indian Wells).  So, I pose the question to you.  Which flavor of drama do you prefer?

I will say, there really is nothing like a Brian Skatell, Don Donatello or Carling Coffing.  With personalities like these, every day in the edit room was an adventure.  “What does Brian have to say about this shot” was always a fun question to ask ourselves day in and day out.  From a Producer’s perspective, the series that contains a surplus of outrageous soundbites and dramatic confrontations is an easy one to craft.  The storylines and moments are right there in front of you and it more or less edits itself.  There is a pitfall to this style of entertainment, though.  What a series like this lacks is depth.  When it’s all about the cat fights, the action tends to stay in the shallow end of the pool.

The seasons that don’t contain these powder keg type moments are inherently more about the personal/internal storylines and really derive that dramatic feel from the challenges themselves, rather than the challenges everyone has in getting along.  Where this can prove to be a much deeper and, when done correctly, more satisfying piece of television, the construction of these underlying stories over the course of an entire series is incredibly difficult to accomplish.

What it really comes down to with the Big Break is that it’s not a golf highlight show.  It’s a story about how a group of people who are all chasing the same exact goal with totally differing personalities manage to coexist with each other.  Golf just happens to be the glue that holds the whole thing together.  As the challenges unfold, the individual personalities come out and sometimes this leads to the formation of sworn enemies (Pam and Danielle from Big Break III).  Sometimes it leads to life changing friendships (Shank and Carl from Indian Wells).  It’s all totally unpredictable and this is what makes this series so consistently popular year after year.  It’s just about as real as reality TV can get.  And really…when the competition itself has so much inherent drama, as it did last night, who needs an argument to ruin it.