What's in a Number? 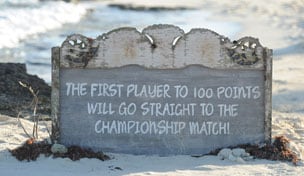 Although the byline of the blog may suggest otherwise, there is no all-seeing, all-knowing “Big Break Producer”; some lone mythical being that writes all, knows all and holds court over all things Big Break.  A super-producer of sorts.  Nope.  Like the myth of Atlantis itself, this singular person just doesn’t exist.  There are a lot of pieces to this puzzle and I’m just one of the corner pieces.  So with all that being what it is, in the words of Mr. Jagger…please allow me to introduce myself…

My name is Brendan Havens and I’m the Senior Producer for this season of the Big Break.  Those die-hard fans of the series, I’m sure, have read my incoherent thoughts and ramblings from past seasons Producer Blogs (including the preview blog for this series Shark Tanks, Casinos and Rum, OH MY!!!).  My last producing foray into this wonderful world of wicked awesome reality drama was the Big Break Indian Wells Series.  Jon Painter and Scott Lee are my co-Producers for this season and you’ll also be hearing from them as the series progresses every week.

As we all witnessed in the premiere, this season’s Chubby Checker- worthy twist is that all-important race to 100 points.  For the 1st time in the history of Big Break, someone will get a “bye” into the Championship Match.   Pretty darn important stuff, especially for those competing for that ginormous grand prize of tour exemptions and cold, hard, cash.  And when you really think about it, the number 100 is extraordinarily synonymous with money as most of the world’s currencies are divided into 100 subunits.

A high level of execution, mixed in with a little luck here and there can go a long way not only in the Big Break, but in most professional sports as well.  The 100 RBI mark in baseball will usually have you in the running for MVP; and in hockey, 100 points in a season could get you the Hart Trophy.  In football, the field is 100 yards from goal line to goal line and 100 yards rushing or receiving in a game are marks that fantasy owners geek out about (yeah, I know touchdowns are even more valuable, but I’m not about to delve into a player-value discussion with that subculture in this forum).  The NBA record for points scored in one game by a single player is 100 (Wilt Chamberlain back in 1962).  And for those cricket fans out there, I don’t even have to tell you that 100 is the number of runs required for a cricket batsman to score a century…a VERY significant milestone.

A Big Break cannot be won without 100% effort and, as the intensity of the competition heats up, disagreements have had a tendency to arise between the competitors.  You know who else disagrees all the time?  United States Senators.  There are exactly 100 of them.  Sometimes tensions can even reach a boiling point (aka: 100°C) or even explode like an atomic bomb…which is where the element Fermium was first discovered in the debris of the first hydrogen bomb explosion in 1952.  Fermium’s atomic number?  100.

With Big Break being a TV show, 100 episodes usually marks a pretty significant point in a television series as when a TV series reaches 100 episodes, it is generally considered viable for syndication.  (HINT HINT…)

Now I know the song 99 bottles of beer on the wall doesn’t have the number 100 in it, but c’mon…the dude who wrote that song had to be drinking the 100th beer from the wall when he came up with that idea.  I mean, seriously.  Who would buy 99 beers anyway?

What was I talking about?  Oh, right.  100 points gets you to the Championship Match.  As you can see…there’s about 100 reasons why this season is going to be awesome.