When Everything Goes Wrong Ill Make it Right 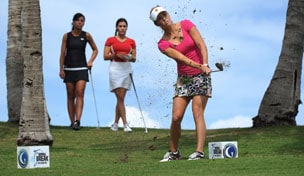 Getty Images
SCOTTSDALE, AZ - JANUARY 31: Brian Gay hits his second shot on the second hole during the third round of the FBR Open on January 31, 2009 at TPC Scottsdale in Scottsdale, Arizona. (Photo by Stephen Dunn/Getty Images)  -

It’s that time again, kids.  Time for another round of incoherent thoughts and ramblings from yours truly, Senior Big Break Producer, Brendan Havens.  Two weeks ago, fellow Producer, Jon Painter, took you inside the challenge of hiding the #1 player in the world; and last week Scott Lee lamented about having to work…rather than go down Atlantis’s many waterslides.  Well, I’m back this week to talk with you wonderful people about an inevitability that hangs over us every day of our lives whilst engaged in every facet of this massive production known as Big Break.  What do you do when things go wrong?

I feel it’s time to bring this up, because this was an episode where some things certainly did go wrong.  Most of the missteps are completely undetectable by 99% of the viewing public.  Yet, some are much more obvious than others.  Let’s start with the obvious, shall we?

Aubrey’s lone experience with Speed Golf was…um…well…as Tom so eloquently put it “this has gone absolutely pear shaped for her”.  Yup.  This was clearly one of the things that did go wrong.  This type of thing happens, and there’s really not much we can do about it.  The competitors are all human, and once the human element is introduced into the equation, the answer you’re looking for doesn’t necessarily add up correctly; and in Aubrey’s case, we definitely needed a calculator to check our math (literally and figuratively).

Whereas Aubrey’s misfortunes were a very visual representation of what can go wrong, the challenge that followed the entertainment juggernaut known as Speed Golf went on to become a prime example of a challenge that went horribly wrong….but you’d never know it by the final product.  The challenge I speak of is Lone Wolf.  If Ahab had his white whale, Lone Wolf was my white wolf.

The idea first came about because I would play the weekend-golfer gambling version of this game with my friends. It’s a really fun game to play (especially when a few adult beverages have been consumed), so naturally I thought, hey…we should do this as a challenge on Big Break.

The first incarnation of Big Break’s version of Lone Wolf dates way back to late 2007 as we were coming up with new challenge ideas for Big Break Ka’anapali.  The original idea was to play it exactly the way a game of Wolf would be played in a weekend round with your buddies (4 people, full holes of golf).  It proved to be too much challenge to fit in a show and was scratched from the final show plan.  So, we did what we traditionally do with unused challenges and sent it away to the Island of Misfit Challenges, in the wonderful world of Imaginationland.

Every time we begin pre-production on another Big Break, we take a trip to this mystical island and take a good look at those challenges formerly cast away.  In every one of my subsequent seasons, this bear (or should I say wolf) of a challenge continued to resurface…only to be cast away time after time.  Finally, nearly 5 years later, and numerous format/rules changes later, Lone Wolf was finally going to be saved from desertion once again.  Here’s where things begin to go horribly wrong.

The first sign that this challenge would be, well…a challenge, was when we explained the rules to the girls.  We all had assumed that anyone who’s ever played the game of golf on a regular basis knows the game of Wolf and our rules tweaks would be handled quite easily.  Selanee was the only one who had ever played the game before and much confusion would ensue.  Well, you know how the ol’ saying goes.  When you assume…

The point structure definitely didn’t help with things either.  I understand why we gave more points to the Lone Wolf for a tie, but in hindsight, all 3 competitors should have just split the 6 points in that situation.  The whole 4, 1, 1 thing just confused the heck out of everyone.  Now I tell you what, one of the worst parts of doing a challenge that nobody fully understands is trying to get the soundbites you need from the interview later that evening.  Let’s just say, we all stayed up later than we would have liked.

To me, the biggest oversight in doing this challenge was going with the game of Lone Wolf to begin with.  The main reason this game works so well with your buddies is that it helps the lesser skilled players in the group keep up and not get their wallets totally cleaned out by the end of the round.  The best example of this is the fact that Kelly actually had a chance to win Immunity during the final location.  She didn’t really hit a single quality shot in the entire challenge, to be perfectly honest…yet she still had a chance to save herself.  Sure, as we’ve all seen in this series over the years, this type of thing will happen in a team challenge, but the difference in that scenario is that the player (or players) hitting the quality shots on the team win Immunity as well.  Essentially, by Selanee holing two huge putts, Kelly was not only bailed out, but was given the opportunity to win Immunity AND actually send Selanee to the Elimination Challenge.  This concept works great for a few bucks between hackers on the weekend…not so much when a gigantic prize package is on the line.

In that sense, we did not execute this particular challenge the way in which we would have liked, but really…it did work out in the end.  Gloriana and Natalia were the two who played the best and won Immunity and you know what…the challenge was pretty darn entertaining.

And so it goes.  That’s life of a TV Producer.  When everything goes wrong, you just have to find a way to make it right.  You meticulously plan for months on end just so everything can succeed as you’ve envisioned in that wonderful, though sometimes highly unrealistic, Imaginationland command center of our brain.  Unfortunately, the laws of physics don’t apply in Imaginationland and that’s where we can run into these afore mentioned snags.  Lone Wolf spent so much time in Imaginationland, it lost much of what would have made it really work in reality.  So, long story short, don’t expect to see Lone Wolf ever again…