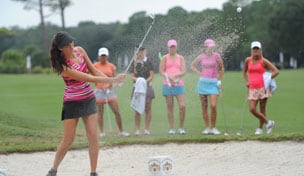 Getty Images
Ed Sneed led by five shots entering the final round and was three up with three to play at Augusta National. But Sneed bogeyed Nos. 16-18 en route to a playoff with Fuzzy Zoeller and Tom Watson. Zoeller won on the second hole of sudden death.  -

Former Big Break Ireland competitors Annie Brophy and Kelly Jacques are back.  Only this time, it is not to play on Big Break, but to lend their insight and provide some fun facts about the ladies of Big Break Florida.  Each week, Annie and Kelly will give you their thoughts on that week’s show, including what the pressure is like each week, since they have been there before.  They also will provide you with some behind-the-scenes info on the ladies – Annie and Kelly have played alongside most of them on the Symetra Tour the past few years.  While they have no knowledge of any results on the series, they will offer up thoughts on their favorites – and some non-favorites – on Big Break Florida.  When not providing their Big Break commentary, Annie and Kelly currently work for GolfNow.com, Golf Channel’s official online tee-times provider.

Kelly: Last week did not disappoint, and neither did this week!

Kelly: I’m loving the theme of the immunity challenges so far – strategy, strategy, strategy! I thought it was great that the girls had no idea who chose what shot to hit in the first challenge.
I figured only Mary and Sadena would choose the long drive. Sadena is one of the longest on Tour so I’m not surprised she won. Into the wind, no roll, at sea level and gripped down to hit a 276 yard drive...that is seriously impressive. Beast mode! Watch out girls!
Annie: She kills the ball, it’s not even funny. I think I said the same thing last week. 275 is definitely not as far as she can hit it either. I hope some of the guys out there watching this season have a new found respect for women’s golf! These girls are good!

Kelly: I am very surprised however that Jackie chose long drive! She is sneaky long and extremely accurate, but come on girl! You holed out that 95 yard shot in episode 1, play to your strengths! In her defense, when you are on Big Break, you hardly get any sleep which can definitely affect your decision making abilities. Many nights the interviews run into the early morning hours and then you have to turn around and get up at 4-5 am. So Jackie, I’ll give you a free pass on the premise of no sleep :).

Annie: Jackie is one of the longer girls on Tour – I appreciate that she went to the long drive challenge. Perhaps pretty silly in hindsight given Sadena’s length. Very few girls could stand a chance against Sadena and her driver. I’m glad it didn’t end up hurting Jackie in the long run. She was sitting at the bottom of the leaderboard for a while – had me sweating!

Kelly: Fiamma, congrats on winning the easiest immunity challenge ever! But I totally get why you were still nervous, sometimes it’s harder to execute a shot when you only have to hit a green, or just two-putt...so good job!

Annie: Pretty easy way to make it onto the next show. I love that in her interview she said she wished she had competed against someone. Really? Was easy immunity so miserable? I did notice she didn’t take the money to keep competing.
How about our girl, Renee, with her great bunker shot?! THAT’S the Renee we’ve been waiting for. I wasn’t surprised that she passed up on the money. She hasn’t seemed very comfortable with her game so far on the show. Hopefully that changes soon!

Kelly: Yeah Renee! It was great to see one of my best friends show her true colors with her rock star short game. Hitting a greenside bunker shot to 2’3’’ is clutch! She is known to chip in A LOT on Tour and has one of the best short games I’ve ever seen. If she can just gain some more confidence in her abilities she’ll be a tough competitor.

Kelly: I’m going to skip over to fashion for a sec... How many LuLu[lemon] skirts do these girls have??!! I mean, I know they are adorable and comfortable and flattering and fashionable and cute and ...okay...maybe LuLu should just sponsor Big Break next season, I don’t think anyone would oppose!

Annie: It’s a little obnoxious, but I live in Lulu, so I can’t really talk. It’s tough to find cute, feminine, comfortable golf clothes, and Lulu skirts are perfect. Good thing the Tour doesn’t have any rules about length of skirts. Lululemon: helping to promote women’s golf one short skirt at a time.

Kelly: On to the second immunity challenge, once again a strategy challenge. It’s interesting to see how these girls think under pressure. I’m so confused by Mary in the final location. I’ve never seen her back down and play for second so I was very shocked to see her play not to lose. She better get that out of her system if she wants to win this!
Annie: I disagree. I think this was really the first time we saw Mary with a game plan and not make ego-driven decisions which could get her into trouble. Big Break is interesting because hero shots don’t help you win on the third show. But bad shots and lack of strategy CAN send you home. So Mary – good work!

Kelly: I’m not sure how everyone else views Lauren after this week’s episode, but I definitely see her as a weak link. Solely because of her willingness to let everyone see her get upset and make a scene. I get it...golf is emotional and golf is tough, but in a competition like this, that is rule #1 to survive. DO NOT SHOW YOUR WEAKNESSES!! If she wants to do well not only in this competition, but also as a professional golfer, she needs to get her emotions in check. Even if you have to feed yourself fake confidence, do it! Act with confidence, think with confidence, and speak with confidence. By doing this you will eventually convince yourself that you got this!

Annie: One of my first golf coaches used to tell me “Fake it ‘til you make it” when it comes to confidence. I will say I was impressed by her performance in the elimination challenge – I thought she really stepped up. And I also thought she had on a great outfit – I did comment on that out loud as I was watching. But I was less than impressed with the crying. I was so confused about why she was crying. Did I miss something? Was she sick? Had she been eliminated? Maybe her dog died? Nope. She’s just “not playing good.” Oh. Okay.

Kelly: After Lauren’s breakdown, I think Dallas made a good decision picking her for the elimination challenge. You can tell Dallas is a young player, sometimes that fearless attitude can pay off, but in this situation it definitely backfired. To go for the green when you can’t get there and the green is guarded by bunkers and water=not smart. However, I am impressed at her recovery shot that found the green, but I have a feeling she might hit recovery shots quite often.

Annie: Ahhh – Miss Personality. I agree. Given the circumstances, I think she made the right decision picking Lauren. I think her choice to go for the green in two and the subsequent pull-hook showed Dallas’ lack of experience. Dallas made a couple comments I probably made to my college coach my freshman year. I was a more aggressive player and loved big risk – big reward shots. But that’s a pretty stupid way to manage a golf course. She’s young and doesn’t seem to know much about competitive golf period – didn’t even know the girls out on Tour traveled for months at a time in season.

Kelly: All in all I am not surprised that Dallas is the one to head home. She has the least amount of experience of all the girls and that really showed. I’m glad to see that she is being honest with herself about possibly not wanting to play professionally. There are so many talented girls trying to make it, that if your heart is not 100% in it, I think it’s a waste of time. Find something that you love Dallas and pursue it with everything you have, if that’s not golf, that’s okay :) You have a great head on your shoulders and I’m proud of you for keeping it all in perspective...golf is just a game.

Annie: Ha, Kelly I love how positive you are to wrap these blogs up. I can definitely relate to her realization at the end of the show, but I think it’s too bad that by being cast she took the spot of another girl who is committed 100% to playing competitive golf. I know a lot of girls who would love to be on Big Break, and it seems like Dallas really didn’t know what she was getting herself into by turning pro for this show. That being said – it’s tough to make the realization that professional golf isn’t for you on national TV – so good for her for having the guts to say it.

That’s all for this show! Looking forward to next week already. 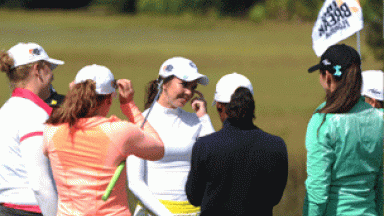 Former Big Break Ireland competitors Annie Brophy and Kelly Jacques are back. Only this time, it is not to play on Big Break, but to lend their insight and provide some fun facts about the ladies of Big Break Florida. 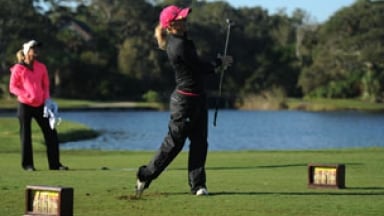 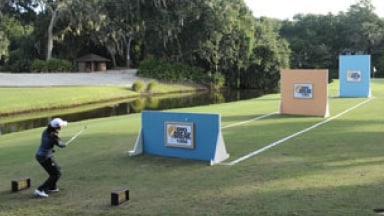 Big Break Ireland's Annie Brophy and Kelly Jacques talk about the entertaining challenges that really require these ladies to think about their strategy when tackling the challenge at hand.