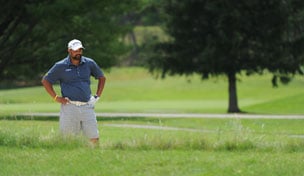 First and foremost, I must thank Big Break, Golf Channel, NBC, The Greenbrier and everyone who had a hand in making the greatest golfing experience of my life a reality. One can only dream of being given such an opportunity and for that, I am forever indebted. To Paul Schlegel, Jay Kossoff and TJ Hubbard, you are all gifts to me and forever a part of my extended family.

Second, I must congratulate James Lepp on a well-played match. You played great and you deserved to advance. I wish you continued success my friend. I feel honored to have met you and forged the friendship that we have.

Ok, onto what people want to hear, my thoughts on what turned out to be my last show on Big Break Greenbrier. Just like any morning, there were nerves about the upcoming day. Today was no different, but I made sure to focus on what was most important, I was still here and I had a chance to continue this journey. When the time came I reminded myself to play each immunity challenge to the best of my ability and let the chips fall where they may.

The first immunity challenge brought memories of playing basketball horse as a kid with the Bendel boys, just this one was called ‘Break’ for obvious reasons. I liked how the challenge was going to play out. Best shot would not be awarded a letter and that same player could assign a letter. I wasn't too thrilled about that part because it was like calling out other players, which wasn't what I thought the challenge should be about. Maybe the worst shot should have just been awarded an extra letter, but you know Big Break. It was already a tough enough challenge considering you had no idea where players would pick shots. Most immunity challenges are spelled out, this one was anything but.

When Mark picked the bunker shot with the first shot, I was happy because I would consider myself a very good bunker player. Turns out that my feelings were correct and I won location one, but that's where the fun ended. I picked James for no rhyme or reason to assign a letter to. I was second to choose a location and looking at this hole, there were so many fun locations. I chose a 'trouble' semi-blind shot over a huge mound. I thought it would make guys think more than just execute the shot. I was pretty happy about my shot and thought it really had a great chance to stand up. Wrong! James won and there was no surprise who would get the extra letter. Touché. This is where the challenge, in my opinion, got very bland. The third location was played from around the 130-yard area. I wasn't thrilled with this number because it's a 'tweener' for me. I wasn't carrying a gap wedge so it was either a very hard sand wedge or taking a little off a pitching wedge.  The sand wedge was the right play, but it brought so many variables into play for me.  The main variable was I had to hit it very hard and perfect to carry that distance. Going to pitching wedge was tough because, although it was plenty of club, there would be very little spin.  With already very firm greens, getting close was going to be pretty tough. This shot didn't turn out well for me in the standings.  I was really disappointed because there was the opportunity to use so much imagination here. Regardless of how it turned out for me, I was eventually eliminated when Isaac gave me my last letter, but afterwards he paid me a great compliment. He simply said, 'I gave you the last letter because you're probably the best wedge player.'  Thanks Squatch.

Going into the second part of immunity, we found out it was going to be another driver test. And anyone who watched the last show knows that I struggled with my driver. Why? I now know, but had no idea then and then was when it mattered. Four guys remained and it was a mano-a-mano match. I drew James and Mark vs. Isaac. Mark beat Isaac and really made it look easy. James and I were a different story. I finally turned a drive over but let's be honest, it was more of a toe hook than my natural draw. Regardless, I was in the trees, albeit with a shot, but James was perfect in the middle of the fairway. James chose to hit his shot, which I would have done as well.  When he missed the green, I was shocked. It was now Mark and I playing for safe city and the final four. I knew I had to hit a good drive because Mark had been playing great from day one. I even considered clubbing down to a 3-wood, but in the end I had faith in my swing and knew I could hit a good drive. I didn't hit it great but didn't hit it poorly and it hit in the bunker, popped out and landed in the rough, inches away from the fairway. Those few inches are what Big Break is all about. When Mark hooked his ball way left, I knew that missing the fairway was a big opportunity lost. On the redo I basically hit the same hanging right shot.  When Mark hit a great drive, I knew the elimination challenge was my next destination. Well done Mark, congrats.

Heading into to elimination versus James, I felt confident and maybe even more so since neither of us had performed very well today. On our first hole, my thoughts were simple, play smart and as aggressive as I could. I didn't hit a great tee shot on the first elimination hole. I think I was too pumped.  I wanted to hit too good of a shot, and pulled it into the left fairway bunker. James hit a good fairway wood shot into the right side of the fairway and followed that up with a shot that landed on the green.  Not very close, but the message was received. The bunker yardage I had was a great one for a fairway shot, 119 yards.  However, it was a little awkward for a bunker shot. I usually like to usually add a half club from fairway bunkers, and this shot wasn't one that I was comfortable doing so with. I chose a hard sand wedge and just caught a little thin.  It sailed to the back and then over. I wasn't frazzled and actually thought I played a pretty good chip shot to give myself a chance to save par. When I didn't, I knew I had to make something happen with only two holes remaining. We both hit decent shots into the par-3, but when James dropped that bomb, I couldn't do anything but smile and laugh inside. It was a great putt. I still had a chance to keep the distance to only one stroke and when my putt slid by the left, I have to admit I was deflated. However, I knew that anything could happen on the par five last hole. After my drive hit the fairway bunker, I knew my work was cut out for me, but there is no quit in this guy from Pittsburgh. I said screw it, let's do a 3-wood. I didn't hit it great or crisp but it managed from some bounces to get pin high left in the rough. There was nothing left to do but hole it.  I had to.  I tried very hard, but it just slid by. When James finally made his final putt, my time at Big Break Greenbrier was over.

I don't think you realize what a gift your given until it's time to have that last talk.  Anyone who knows the 'emotional' side of me, knew that I would not hold back my emotion and would let my feelings be known. What a truly amazing experience. I have been so blessed to have been a part of this and will treasure every memory made here for the rest of my life. You know, I'm disappointed that I didn't win, but I left Big Break Greenbrier a better player, a better person and with new found friendships that I will hold dear to my heart for a lifetime.

I wouldn't be here today without the continued support from my Mom, you are the best and I can't wait for you to meet your grandson. My brothers, thanks for your unwavering support, especially Dana, who I've looked up to since I was a baby although he's never known it. With Dad no longer here, you've become my hero. My in laws, the Almquist family (David included), you've all been a blessing and thank you for everything. To my best friend Bill 'rip', you know me like no other and you are truly my brother from a different mother of another color. I love you bro. And lastly, to Bruce Lange, I think you know how I feel about you and all the privileges that you've afforded me at The Westin Kierland Resort & Spa. Kipp Bates and the staff and Kierland Gold Club, my love, respect and appreciation for how you make me feel is unquestioned, thank you. Jason Boyd Williams, Aarik Greenley and Jake Puglielli at Adams Golf, thank you for your support. Cairo Salvatierra  at TaylorMade Adidas, your help and support are more than appreciated.

I would be remiss if I didn't say that although winning would have been amazing, I've had a pretty amazing and blessed year. I married the greatest gift ever given to me this past December, my best friend and wife Shelley. I was selected to be on Big Break Greenbrier in May and the greatest gift of them all, my wife Shelley and I are expecting our first born, a son, on April 23, 2013. So, to win would have been something to write a book about, but you know what, who needs a book when you have the best that life can offer already.