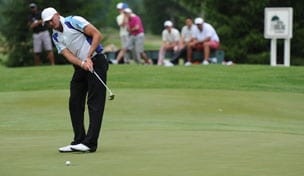 This morning started out as every other one, an early morning wake up call, followed by breakfast.  To no one's surprise, we were greeted with yet another envelope detailing what today's events would be, but at least this time we could see some cards.

Once we were all fed, Mark had the dubious task of reading the letter. The letter detailed that today, we would playing in teams of three based on what cards we picked. Fair enough, let's get to picking. In the end the teams were as follows: Brian, Mark, Chan. Anthony, Rick and Isaac. Ray, Mike and James. On paper, I thought these were all pretty fair teams.

Once on the course, we found out the first challenge was going to consist of three locations, where each player would pick a yardage and play out the hole. The teams' total score for all three locations would be the team score. Yardages varied from 142-220. Our team decided - or should I say Chan decided - that he was playing from the shortest location (I have my own personal theories on this) so Mark and I discussed the final two locations, 172 and 220. Mark said he felt really comfortable at the longer location cause it was a perfect 3 iron, so that made it easy for me. I was playing from 172, no problem.

First location: Chan hit a great shot to about five feet and let’s not kid ourselves, Mark and I were thrilled. The other two teams managed par and that left Chan with a putt to give us a one stroke lead. Calmly enough, Chan made the putt. One stroke lead for the good guys.

Second location: I was up first and when I hit the shot, I thought it was perfect. It carried just to the top of a mound and then trickled all the way to the bottom. At the same time, my heart sank because I had two other guys' destinies in my hands. I had to play since the other two hit the green and my chip was not an easy one. Grain into me, tight lie and of course, the pressure. I nipped the chip perfect and snuggled it up to about two feet. The other two guys made par and all I had to do was make that putt.  I did and we maintained a one stroke advantage with one to play.

Final location: This was a tough location.  A long shot, water down the right and immense pressure. Rick led off and tugged his shot left and into the water. That sucked, because in competition, you don't want to win by default and that ultimately was his team's end, because he was going to suffer a penalty. Ray hit his shot a little right and Mark hit it just short on the front right. Ray hit a great chip to about three feet and all there was left was to see what Mark was going to do. He snuggled his putt to about three feet. Once that putt went in, jubilation for our team. We were safe and on to the next show. Thank The Lord.

For some of you who watched the show, you could tell by my interview that I was a little irritated by Chan's continued celebrating. What you didn't see was the constant talk after the challenge about being safe, almost boisterous to a degree. That's what pissed me off. I understand that for Chan, being safe and not having to face another elimination challenge was great, but what he has to understand is there are several other players - now friends - facing another immunity challenge and possible elimination.  We need to respect the pressure that they still must face. Be happy, celebrate for a few minutes, then let it go. Act like you've been in the winner's circle before.

I thought the second immunity challenge was a great one, three locations and again, a somewhat call out session. You play from three locations and if after your shot, you think you can hole your putt, then have at it, but if you think your opponent can't make his, then you make him putt it. The best thing here was watching James and the saucer shot. And boy did he pull it off. Great shot. The second location was a pretty basic bunker shot.  Ray hit first, decent, but clearly not his best. Anthony followed with one that just got away from him and ran off the green. Smartly, Ray made Anthony play. He had to chip it in.  He didn't.  It was all tied and coming down to Mike vs. Isaac with a green side flop shot. Isaac went first.  From the bench, we thought his shot was perfect, but it checked hard and left him 10 feet or so. Mike hit an awesome shot to about 3 feet and we all figured it was over. But that's why you play the game. Mike chose to putt his - as we all figured - but not without much deliberation.  That surprised many of us, and we were not sure what happened, because Mike missed what we all assumed was a gimme. That meant that Ray, Mike and James were up for elimination and that also meant another top player was going home.

When it was all settled, it was Mike and Ray going at it. They were playing the par 5 16th on the Snead Course.  What a great hole. The highest elevation point on the entire golf course, and man, what a view. Mike teed off first and found the fairway bunker. Ray followed with a tee ball down the right that almost found the water but held up in the hay. Ray, as strong as he is, slashed one back into play.  Mike decided to lay up out of that fairway bunker. It was going to be a wedge contest. Neither hit specifically great shots.  Ray hit a good shot but it trickled off the back and Mike left himself a putt.  However, seeing this green, he did not get a real great look. They tied when Ray made a clutch 8 foot par save and back to the tee they went. This time Mike carried the bunker but still in the rough.  I thought that put more pressure on Ray to hit a great - maybe aggressive - tee shot. He backed off, hit 3 wood and found the left fairway bunker. To everyone's amazement Ray, from 234 yards, ripped an iron out of this bunker and almost got it on the green. Talk about shifting momentum. Now the pressure was clearly on Mike. Mike responded well and hit one up the left side, about pin-high. This time, it was a chipping contest. They both hit decent chip shots. Not sure if everyone saw this on TV, but right before he putted, he shot called his putt, saying it was in. He stepped up and boom, it went in. Now the pressure was on Mike to advance the challenge to another hole. He missed and that was the end to Mike's journey on Big Break Greenbrier.

You hate to see your friends leave, but in the end, we are all here to win and every show, someone MUST go home. Mike is a great guy and I'm thrilled that I had the pleasure of meeting him and learning more about his son. He'll do great things with golf. He's a class act.