I'd Rather Eat Nails than Hit Long Bunker Shots 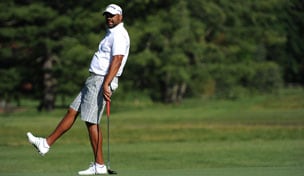 Week six of Big Break Greenbrier. Oh, where to begin? Let’s start at breakfast as that seems to be our normal starting ground.

Breakfast is starting to take a pattern, we all want to talk, but we just don't want to say too much before we hear the dreaded, 'the bus is here'. Talk always comes to what players thinking the challenge of the day may be, but on Big Break, guess all you want, ‘cause you'll never know.

As we finally made it out to the course, hole number three of the Old White TPC, a fairly mundane par three. That is, until you make your way to the approximately 150 foot-long green. That's right, I said 150 feet. The rules were simple enough. There were seven players and we were all going to take a shot from four different locations and you would be awarded points, ranging from seven points for the best or closest shot, to one point for the worst or furthest shot from the hole. If you made the unfortunate mistake of missing the green, you would get the dreaded goose egg.

Our first location of the day was going to be a 120 foot putt. This putt starts out kind of flat, drops severely then raises nearly five feet for the remainder of the putt. I think I got the best part of this challenge because I was going last. Watching the guys putt made the putt seem harder than I initially thought because we’re taking serious swipes at the ball. When it became my turn, I was up against a putt of about three feet and let me tell you, three feet from where we started was stupid good. I hit an amazing putt and it rolled up to just over two feet and looked for a moment like it might sneak in. Therefore, I was in the lead after one location and was very happy. I wanted to make this day as quick as possible but still had to be realistic that only two were moving forward from the first challenge.

Location two wasn't much easier. It was a long bunker shot that had to carry enormous swell and, let's be honest, long bunker shots are brutal. Add Big Break pressure and I think I'd rather eat nails. Since I was leading, I got to go first, not an easy task normally, and even worse now. I made a choice to switch sand wedges and go down to my 54 degree just to help it fly a little longer. Good choice because I hit what I thought at the time was a clear winner to about 12 feet. When the second location was over, I still led and the only real shock was that James thinned one over the green to get zero points.

On to location three. This was going to be an 80-yard shot. It was simple enough and a shot that I liked. Again leading off, so I wanted to set the bar high. I hit the shot and honestly have to grade it fair. I hit it to 12 feet, didn't kill myself, but didn't send the message that I wanted to send. Some guys hit really good shots, some average like mine. Expected to perform well in this challenge after his long putt was Rick and he did just the opposite. He seemed out of sorts and almost disinterested. At this point he was bringing up the rear and looking at going directly to the elimination challenge as the person who finished last was headed there. Three locations down and I'm still leading with one location remaining, a 160-yard shot.

Knowing after doing some math, all I had to do was hit the green with something similar to the 89-yard shot and I'd be safe and onto the next show. I hit a not-so-decent shot but it hit the green and only one person could keep me from show number seven. His name was Anthony.  Of course I was sweating because all he had to do was pretty much get it on the top level and I was done. He gave me a gift and missed the green which made me safe, along with Mark who ended up winning the challenge.

Safe and onto show seven. Very, very happy. Rick directly to elimination. Come on Rick, snap out of it buddy.

The second immunity challenge was pretty cool, to say the least. Squares were marked on the ground and you had the chance to hit your ball into the squares and get as close to blackjack or 21 as possible. The catch, your opponent couldn't know your results, just your reaction. Some players reactions seemed like they were trying to win an academy award more so than winning the challenge. First match, James vs Anthony. James went first, (funny reaction), because I like James and he scored a 20. Good score. Anthony went second, hit two great shots and scored blackjack. Win for Anthony and now James was up for elimination. Match two, Isaac vs. Chan (movie role debut). Isaac goes first, handles himself with class and sits down with a 19. Chan steps up, hits three good shots and scores 21. Well deserved but the gamesmanship wasn't needed. As Isaac so colorfully pointed out, his antics weren't appreciated by Isaac or for that matter, any of the guys watching. Regardless, final match was between Anthony and Chan. Winner is safe, loser goes up for elimination. Chan went first and scored a 20 so now it was up to Anthony. Anthony stepped up as he had been doing pretty much the entire show and got blackjack. At the revealing of the cards, Chan's reaction was not the same as his audition against Isaac and when he knew he was up for elimination, I think he knew he was getting picked. We all know Rick wasn't picking James, he loves James.

This is where I can only speak of the show from what I watched because I along with Mark and Anthony were not present for the elimination, but it was epic. From what I saw and what I've been told, the match should have ended on the first hole, but Chan got two great breaks and the match endured for what they say lasted forever. In the end, Rick prevailed to the, for lack of a better word, delight of some players. As Rick stated during the show, he wanted to shut Chan up very badly for all his talk and his self acclamation as the 'Elimination King'. You talk long enough and you get bit, just like Rick said.

Chan's ride was over and the one thing I think all the players wished, was that Chan didn’t let all the guys get to know him. We never saw the real Chan, just a lot of BS and acting. I hope he realizes that there were 11 other guys here and he should have been real and let us see him, not the circus or eating grass, giving yourself names, etc.

Talk to you next week,