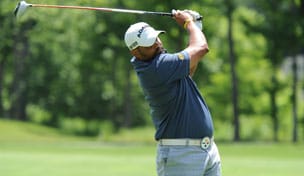 “Golf is a game of inches.”

It’s almost a tired old golf cliché ¬− or at least it would be if it weren’t so damn true.  Think about it for more than six seconds and you can probably come up with your own examples of this time-tested adage at work for—but mostly against—you.

And just in case you had trouble coming up with your own cases of inches making all the difference in the golf world, recent Big Break history provides some pretty clear “inch”-stances.

There was episode 5 of Big Break Dominican Republic, when teams were charged with the task of hitting increasing length tee shots.  Hit it farther than your team’s previous effort, in the fairway, and you get to keep going.  With 104 yards on the board and hitting her team’s 5th shot, Lori Atesedes bested her teammate’s distance by a whopping 3 inches to continue their run.  Epically, their increasing length clinic would go another 7 shots before the “Glossy Posse” finally ran out of fairway.

In episode 3 of Big Break Atlantis, Zakiya Randall was all set to enjoy not only immunity, but an afternoon at the Aquaventure Waterpark when suddenly her plans were ruined by Aubrey McCormick.  Aubrey’s bunker shot snuck inside Zakiya’s mark by just 2 inches, setting off a chain of events that saw “Z” getting more exercise than she wished for (i.e. taking the walk).

And so it was with Brian in this week’s episode of Big Break Greenbrier.  Through no fault of his own, Brian advanced to the winners match in the second Immunity Challenge, in which the player nearest the hole and in the fairway got to decide who would play to the green.  Hit the green, and you win; miss the green, and your opponent gets the W.

The key part in this match was that in the fairway bit.

Brian teed off first against Mark, and his drive splashed through the bunker, coming to rest in the rough a mere 6 inches short of reaching the fairway.  Mark promptly stepped up to the tee and yanked his somewhere left of Bill Maher.

Had Brian’s ball made it to the short grass, he would not only have been in the driver’s seat, but he would have taken the car all the way back to the Summit Village, where he’d be resting up for another day of golf.  But in his own words (which we couldn’t show you at the time because it would have revealed too much) it “later turned out to be [that] much between the end of everything”.

If Brian’s in the fairway, one of two things happens.  Either he hits short iron into a welcoming green or he makes Mark play Harry Houdini for a day and take his chances with a jailbreak shot from a spot Google maps still doesn’t know about.

Instead, they re-teed, and Mark took control of the match—not to mention the destiny of both players.

For what it’s worth, Brian should not look back and lament the 6 inches that cost him his Big Break life.  Ultimately it was the dozens of collective yards that he was off line with his driver throughout the course of the series.  His mid-to-short range game was never in question, as indicated by Isaac when he felt threatened enough to knock Brian out of the B-R-E-A-K challenge.

But Big Break is still a game of inches, and in this case, the inches added up to miles − sent back home, miles away from America’s resort.  And what must have felt like miles away from the ultimate goal.

Of course, Brian’s journey has already spanned many miles − not that you would know it to look at him.  The fire that he occasionally displays on the course is the same one that fuels his desire to be the best at whatever it is he does, even in defiance of age.

Coop is like a Montreal bagel, rough and hard on the outside, but on the inside he’s just a big softy.  This is a guy whose bottom lip starts to quiver at the thought of someday being a father.  Away from the course, you’ll struggle to find a more gentlemanly individual.

But inside the ropes, he refuses to budge.  Even an inch.

• James hit no fewer than 4 shots with his eyes closed in this episode.  In case you hadn’t noticed, James is an extremely cerebral player.  He says closing his eyes during the swing keeps him from trying to make adjustments on the way down.

• Rick’s strategy to re-play the third location in the B-R-E-A-K challenge seemed like a good idea at the time.  But it backfired, as he ant Isaac indicated (in hindsight), by giving great players a second chance at the same shot.

• Mark is your average superstitious golfer.  While preparing to play the second Immunity Challenge, Mark asked for a blue Sharpie that he could use to mark his ball.  Several members of the production crew had Sharpies, but none were blue.  At the last minute, Production Assistant Will Walker raced to the tee with a blue Sharpie that he had obtained back at the production office, and the rest is history.

• The Drive/Who Will Approach format in the second Immunity Challenge is basically an offshoot of the Pitch/Who Will Putt challenge, as seen in episode 4 and on other seasons of Big Break.  Other variations have also been used.

• As the belt buckle would indicate, Brian is a die-hard Steelers fan.  And while he left home without his, the friendly and capable Greenbrier staff was able to provide him with a Terrible Towel.  That’s the one Brian waves during his final walk.

• In addition to the shooting adventures at the Gun Club, The Greenbrier offers a host of unique guest experiences for thrill seekers, including: falconry, mountain biking, an Alpine climbing tower, kayaking/white water rafting, paint ball and off-road driving.