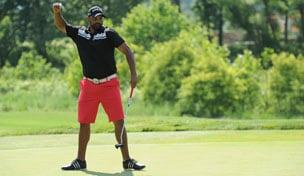 Getty Images
HALF MOON BAY, CA - OCTOBER 04: Lorena Ochoa watches her shot on the 2nd hole during the third round of the Samsung World Championship at the Half Moon Bay Golf Links Ocean Course on October 4, 2008 in Half Moon Bay, California. (Photo by Jonathan Ferrey/Getty Images)  -

Where to begin with Episode 5. Just like any other morning, it started out very early, foggy and did I say it was early? Breakfast was just as good as the day before as Golf Channel made it a point to make sure that we were more than taken care of. Breakfast was great, just a little more quiet.  I’m not sure if that is because we were losing people by the show or if tensions were just getting that much higher. I think it was more the pressure.

Once on the course, loosening up and hitting balls, we found out that we were finally getting to one of the hallmark shots of Big Break – 'The Flop Wall'. Once we made it out to the course and actually saw the wall, TV does not do the wall justice. It's more than just the fact that the wall is 9 feet, you can't see your target behind the wall, so the illusion of the wall seems even bigger.

The rules of the challenge were simple.  Three flop shots from three different distances; 9 feet, 6 feet and 3 feet. No excuses from me, but something just didn't feel right to me – both in my head and with my golf swing – but I'm a gamer and I had to make this work. The flop shot to me is a fairly easy shot. I play it well and feel very comfortable with the shot. My first shot was less than desirable, but I just couldn't imagine using my mulligan so early. In a regular event, that putt is makeable, but we're not putting, so screw that thought pattern. Only one player hit a short worse than mine, Rick. So, we had some distance to make up. Ray, Mark and Anthony hit really good shots with Ray actually holing out his mulligan shot. With my second attempt, I didn't really do much better and knew at this point that there was no chance that I would advance through this challenge, so it was time for me to get my head right for the second challenge, because I was going to need it. It was now just a matter of who was going to be safe and who would be joining me at the second location. After the third and hardest chip – it was my best shot I might add – and the best shot of the final location was 2 feet. Mark and Issac were safe and they deserved it.

The second Immunity Challenge consisted of three locations. A greenside chip that had to be within 5 feet, a shot from about 140 yards that had to be within 12 feet and then the toughest of the shots – a side hill shot from about 180 yards that had to be within 25ft. I really needed to redeem myself, but again, I was struggling mentally and had to battle through.  James was the head of the class at location one with the saucer pass.  There was a mixture of success for the guys, but I really stunk it up.  As the show indicated, I was very frustrated.  Many people think my frustration was directed at Anthony, but in fact it was more directed at my inability to handle shots that I've handled in my sleep. Anthony just happened to show sympathy at the wrong time. Unlike some people, I made it a point to apologize to Anthony very quickly, it just was not caught on TV. So, I was in last place and staring the Elimination Challenge dead in the face. On to location two.  The guys really struggled. By the time it got to me, I had the chance to make a huge move with one swing of the club and that is what I did. I painted the flag and moved into solo third and on the advancement line to move onto the next show. One location left and my horrible day could be forgotten. If you think the guys struggled at location two, location three was even worse.  No one did anything worth mentioning and when I had my fate in my own hands, I threw up all over them and paved my way to the Elimination round. All that was left was who was going with me and who was I picking.

It came down to me having to choose between Rick and Ray. Ray, being my roommate while on the show was a tough pick for sentimental reasons but reason and feelings had to be thrown out the window. I had to pick whom I thought I matched up better with or whom I thought was playing just as poorly as me. There were lots of rumblings from the other guys during play and at lunch about who was struggling and what not. The consensus, although not asked for was that Ray was maybe not on top of his game, but I knew Rick wasn't either. I saw the shots, I just had to weigh pros and cons. When it was all settled, the main factor in my decision was I just didn't know enough about Rick's game to pick him. So, I picked my roommate. Not an easy pick, because he and I both wanted to make the final duel together.

The elimination was simple. It took place on the 14th hole on the Snead Course and played out from three locations, playing the hole twice. The first location was from 180 yards and I was first to play. It wasn't about pin seeking, it was more about hitting a good shot and making Ray match it. I thought I hit a shot better than the one I hit, but was pleased with the outcome, under the pin about 15 feet away. I knew I could make this putt. Ray followed me with a good shot of his own and would putt first. When he missed, I felt a surge for the first time today, because I was finally in charge. Something that I did not feel all day. However, I missed my putt, even though it was tracking the whole way. Just a lack of pace.

Back to the tee and I chose driver, even though I had been struggling with the driver since I arrived. Before I hit my tee shot – I think it was simple to see that I was not hitting the driver well – I was thinking, “try to apply pressure.” Unfortunately, due the horrendous tee shot, I gave Ray relief because I was in two feet of high hay with pretty much a prayer. He hit the fairway and then hit a good wedge to about 15 feet. Then it was my turn. Not a great lie, two foot high fescue and existence on the show at stake. What happened next was probably the best shot I've ever hit under the circumstances in my life. Not only did I get it out of the hay, but managed to get it on the green at pretty much the same location as my first putt. Ray putted first and when his putt peeked at the hole but slid by, I again had the chance to close this out. I think I hit the exact same putt, same pace, same result, about two rolls of pace short from the heart.

Back to the tee.  Ray, sticking to his iron play, hit another good tee shot in almost the same position. Me on the other hand, I stuck with driver even after that awful tee shot. I didn't hit it much better, but this was in play and I had an okay look at the pin. Ray played first and hit a really good shot but it spun off the green. Again, I felt a surge knowing that if I could get a good shot, I would have the advantage. Seeing Ray's shot spin pretty severely from right of the pin, I thought that I had a great angle and the possibility of getting it close. I could not have played it any better with 10 balls. I hit it on the right edge of the green and it caught the slope and rolled to about six feet. When Ray missed his putt, it was my time. I had to take some time to collect myself – so many thoughts were racing through my head. When that putt went in, all of the bad shots of the day were forgotten, and I felt this surge of emotion rush through me. All that kept going through my head was, I wish my Dad were here to see this and the moment took over.

I think by the looks of the show, I'm made out to be the hot head, but in reality, those who know me know I am something different. I didn't grow up a golfer, I grew up playing contact sports, so being physical and showing emotion is what I know. I'm an emotional golfer. I expect a lot out of myself and when I don't perform to my standards, I show that emotion. I don't do it to be 'that' guy or to disrespect my family, friends, fans, the game of golf, sponsors and most importantly, myself. I'd like to think that those who saw the end of the show and my interview see the other side of me, the side that is a family man, who holds everyone accountable, who respects the game and one who shows just how much this opportunity and the game of golf means to me. It means so much to me, it sometimes hurts me to my core.

Take the time learn about the real Brian Cooper, I think you'd like him. He sure likes and appreciates you for tuning in to Big Break Greenbrier.