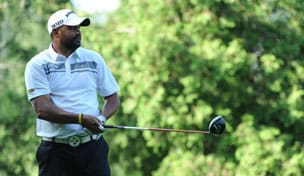 Week seven and yet another early morning at the Big Break table. I think at this point we are getting more and more used to the drama and what might be in store for the day, but always aware that this is Big Break.

At this point, my emotions are ranging from exhaustion to excitement to wonder. But all in all, the goal remains the same, play your best and do what has to be done to survive and make it to another show.

Once we got to the course to see the immunity challenge, I was a little uneasy. The first part of the two-part immunity challenge was going to be a driving/distance challenge. Before I arrived at Big Break, I was hitting my driver great, but once I got here it wasn't the same (details later), so there was some apprehension on my part that this would not be a good challenge for me. Normally, book it, done deal, I would have excelled, but today felt different.

As the challenge began, I knew I had to make the best of it and get the most out of this challenge to be competitive and not hurt myself. That is now laughable to think back on. I think I hit three of the worst drives I've ever hit. Anyone that knows me knows I hit a draw every time and much further than 250 yards. After the challenge, my worse fear became reality. I was in last and had loads of ground to make up.

Ok, about the driver. The explanation is simple. Later and not until much later, actually during the last day packing to come home, I realized that there was a crack at the hosel in the shaft of my driver. No excuse because I had a backup shaft, but I really thought it was just my swing. And just so you know I'm not making excuses, I don't blame it on this because I should have switched to a three-wood, which I hit a minimum of 270 feet. I've heard of this happening and even happened to Big Break Ireland winner Mark Murphy when he traveled for The Irish Open. He opened his bag and boom, broken driver. So now I always take the head apart before traveling and place the shaft in the bag upside down. Future problem solved.

Onto the second part on the immunity challenge and I knew I had to make something happen. Mind was clear and driving part was totally forgotten. When we saw the challenge, I was pumped because it was basically a wedge challenge and I know I hit my wedges about as good as anyone. There was a lot of risk/reward with this challenge and when the guys in front of me stumbled, I took advantage with my first shot, moving from the outhouse to middle of the pack and right back in the mix. The second shot was all about timing and the timing of the train whistle got me perfectly. I wanted to stop but was too far along in my swing and had enough of a hitch to pull it slightly and miss my target area. Oh well, I still had life. What it came down to during the final shot was basically me vs. Anthony. Anthony hit a good shot and forced me to hit the 20-foot shot. It was simple, if I hit the shot, I was safe. I did just that and was happy to be safe and part of the final five. It just goes to show you with golf, you can hit poor shots, but if you focus, you can rebound and turn it around. I was very proud of my turn around from the morning.

On a more personal note, prior to the elimination, I pulled Anthony aside as I could see he was not himself and reinforced that he belonged here and if he got his mind right, he could beat Isaac. I wanted him to know that he had the talent, he just had to believe in himself. Unfortunately it wasn't meant to be and Anthony lost. I was sad to see him go but think he got a lot out of this experience. I wish him and his wife well and the expectant arrival of their first son.

On a side note, I think I need to quickly address something that many people are commenting on. My emotion. I am an emotional player. That's never going to change, but it is highly unfair to judge one by a few little instances that measure maybe less than 10 seconds out of hundreds of hours of video. This role as the emotional guy seems to be how they want to portray me and I'm fine with that, but people, don't judge a book before reading it. Remember, I'm a son, brother, husband and soon-to-be father and I'm far from perfect, but I also believe many of you that are commenting negatively about me are far from perfect as well. You are shown what they want you to see. There are a couple of things you haven’t seen aside from the talk I mentioned with Anthony above. I had talks at length with Stu concerning his battle and tried to explain what changes he needs to make to survive this addiction. I talked with Ray while he was dealing with something pretty emotional during the show. So, understand that I am far from perfect but I'm also not exactly what you are seeing on TV.

Happy Thanksgiving to all the viewers and their families and thanks for watching the greatest golfing experience of my life unfold. I'll be blessed to be surrounded by my pregnant wife and in laws and enjoying the Friday Day-after-Wiffle-Ball-Tournament at #RoenicksLittleFenway. Gobble Gobble.