Reflecting on First Half of the Season 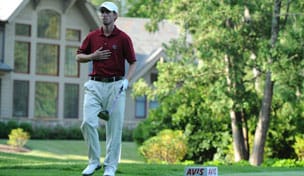 We have reached the halfway point of Big Break Greenbrier – what was a cast of 12 are now 6.  It is customary that when we get to this point in the series we ask the players to reflect on their Big Break journeys thus far. Here are their perspectives in their own words:

Rick Cochran:  “Everybody remaining has got a chance at winning.  You know all it takes is one good shot, or on the opposite of that, one bad shot and you’re going home.”

Brian Cooper: “If you can’t believe that being a champion is a reality for you, you shouldn't be here. Of course I think it’s a possibility!”Mark Silvers: “I really do believe that I can win but I also have to keep in mind that it doesn't take much, especially at this point, in the show to get the boot.”

Isaac Sanchez:” I definitely think becoming a PGA Tour champion is a reality for me. As long as I stay on the path that I’m on and work on the things I need to work on and it’ll only be a matter of time.”

James Lepp: “I had kind of a rough last couple episodes and if you asked me three episodes ago if I could be a true Big Break champion, I would say, yeah. I still believe it but I will say that the pressure that the Big Break brings is a lot different than anything I’ve experienced.”

I put Anthony’s sound last to highlight a distinct difference between players that can play and players that believe they can play. Once you reach the pinnacle of any sport a definitive separation appears at the top – and it’s exclusively divided by BELIEF.

Anthony is a VERY talented golfer but he’s also eliminated for one obvious reason – he didn’t believe he could play. He outlasted Ray Beaufils (former Web.com tour player) and Mike Tobiason (played in the 2011 US Open) and several other quality golfers which should be something for him to hang his hat on.  The question is, can he? Will he?

In nine years of producing golf television, I’ve had the honor to stand next to the number one player in the world and watch him (and her) hit golf ball after golf ball on the range. I followed the PGA Tour for two years covering news and instruction.  I have been to every major mini-tour in America and have seen over 3,000 professional golfers swing a club. I’ve been on 13 separate Big Break shoots.  I’m not going to say Anthony Casalino was the best golfer I’ve ever seen…that would not be true.  I will say that Anthony’s game can be and sometimes was quite impressive.

I produced Anthony’s biography video in New York and watched him hit 5/5 fairways and 7/7 greens after not hitting a single warm up shot and after two practice swings.  He was giving Cliff Katz a playing lesson during our shoot and I was struck by the quality and the crispness of Anthony shots.  He shaped his golf ball the way he intended and maneuvered around the course with precision. While this may not impress any of you, it certainly made me appreciate Big Break Greenbrier’s version of “Eeyore.”

We have reached the Final 5!!!

Going into this series, I promised great golf and great competition.  I don’t think I need to point out the great shots from this show but allow me to highlight a few key moments.

Isaac’s 2nd drive in the Avis Extra Effort Immunity Challenge traveled 302 yards and was ‘technically’ 1 yard off-line.  Because of our scoring system, we rounded to the nearest yard and because Isaac’s drive didn’t land ON THE LINE, he lost 1 yard when he ACTUALLY measured just 1 foot and 7 inches away from the center line.  That was fun to see… and in the next episode you’re going to see a shot Isaac hits that comes down to mere inches with Immunity on the line.

Rick Cochran is the shortest (height) competitor left on the series.  And if you asked anyone of the cast WHO hits it the longest (Isaac included) EVERYONE would say Rick.  That’s impressive especially when you factor in Rick’s ball flight is a cut which means little to no roll. Although Rick ONLY hit a drive of 307 yards… coming back to the bench, Rick was mad.  Later that night, Rick was pissed off because “DRIVING is what I do,” he told me.

Brian Cooper HATES misses golf shots.  I don’t know if you noticed, Brian has the tendency to get a LITTLE angry when things don’t go his way. And if you’ve seen his outbursts then chances are you’ve seen his responses. EVERY time Brian has vented and taken out his frustration on benches, clubs, water bottles and empty golf ball boxes, he finds a way to channel his focus in a positive manner. Brian would have recorded the only perfect score in the approach challenge had it not been for a rogue train conductor.

Mark Silvers wins again and not just with AVIS… Mark qualified for Final Stage of Q-School this week and heads to California in December to pursue his dream of playing on the PGA Tour. This has been a tough year for Mark off the course; he lost his father three weeks before we began filming the show in June.  Mark said that he knows “he’s looking down smiling” as a “proud father” after all he’s accomplished this year:  a solid season on the NGA Tour where he finished 3rd on the money list that included a win and 10 top-10’s in 13 total events. Best of luck to Mark – you earned it!

James averted another elimination challenge after Isaac selected Anthony marking the second time in four shows that’s happened. The 2005 NCAA Champ and two-time Canadian Tour winner NEEDS to pick up his game.  The rust is certainly showing… anyone have any suggestions?