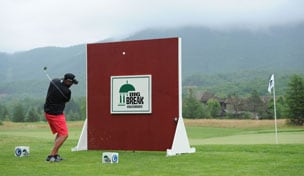 In four seasons of working as a producer on the Big Break I have frequently heard from competitors that the best part of being on the show is the relationships that are developed with fellow cast members.

At times it’s the worst part.

Many viewers will remember the story of “Clutch” Carl Whyte and Robbie Biershenk (aka “Shank”) from Big Break Indian Wells.  On the surface the two have less in common than Ford and Chevy men.   The fact that they were roommates on the show was completely by chance.  The friendship they forged was by choice.

Twice on the Indian Wells series, Carl and Shank had to face off in emotionally charged duels (Carl won both times), and each time the result was highly dramatic both during and immediately after the challenge.  That’s the nature—in many ways, the essence—of the Big Break.  The competition comes and goes.  The exemptions and cash are eventually spent.  The friendships remain.

Flash forward to the Greenbrier, where another battle of the buds was brewing in episode 5 between Brian and Ray.

Some friends are born out of camaraderie.  This one seems rooted in mutual respect.

Though they come from very different parts of the world ¬– Brian is blue-collar, Pittsburgh through-and-through, Ray a savvy and slick Aussie in flashy pants – the Phoenix area of Arizona has become their adopted home.  My job on Big Break Greenbrier afforded me the opportunity to get to know Brian and Ray in their own back yards.

Brian and his wife Shelley are the embodiment of the adage that “life begins at forty”.  After finding each other later in life, it’s obvious they both realize the importance of making every moment count.They value family and friendship above all else.  If you’re ever lucky enough to be invited to dinner at the Coopers’ house, make sure Brian’s blackened tilapia is on the menu.  (Follow Brian, as I do, @CoopsGolf – but don’t expect the recipe.)

A Scottsdale transplant by way of Australia’s Gold Coast, Ray is 20 years Brian’s junior and as tough as his background in rugby would lead you to believe.  (The black eye he sustained while shooting some rugby scenes for the Big Break Greenbrier preview show serves as evidence.)  The next time you’re looking for a tremendously entertaining Friday night in Scottsdale, look for Ray at Harold’s Corral or the Buffalo Chip Saloon.  You won’t be disappointed.

So the two men from vastly different backgrounds found more common ground as they became roommates in West Virginia, and ultimately opponents in an Elimination Challenge.  A room divided.

Brian’s choice between Rick and Ray was not an easy one.  After cruising through the first 3 shows, Rick had finally shown some vulnerability.  But it’s hard to put yourself in a match against the guy who shot 63 on the Old White TPC in the practice round.  So you go with the guy who’s spent a year on the Web.com Tour.  Such is life on this Big Break.

Like that Safe City bench at the chipping location, Brian was kicking himself for getting into this spot in the first place.

As Brian made clear, it was nothing personal.  By the time they reached the elimination challenge, Ray expected it.  What the rest of us expected was a very good match.  And we got it.

As the guys said after the match, another birdie – and another good player gone.

• According to Brian, the most nervous he’s ever been over a golf ball was on his shot from the fescue in regulation of the elimination challenge.

• In his 3 attempts at the flop wall in the first Immunity Challenge, Mark averaged exactly 2 feet 11 inches per shot.  And he never bothered to watch where his ball landed.

• Though Brian calls the flop wall “that 9 foot beast” in episode 5, the wall is in actuality 8 feet tall.  (We kept the reference in there because it makes it seem even scarier, and hey, it’s close enough.)

• Did you notice the rectangular cut in the rough on the right side of the green in the first Immunity Challenge during episode 4?  (Ray’s tee shot lands directly in the middle of it.)  The cut was made in anticipation of the flop wall challenge, which would take place on that same hole on the Snead Course one day later.

• For a man who’s got hands as big as catcher’s mitts, Isaac has surprisingly soft touch around the greens.  So soft, in fact, that he can’t even hold onto a rainbow trout.

• Episode 5 marked the second appearance of James’ hockey-inspired “saucer pass” shot.  The former victim of the chip yips was the only player to score a 1 at the first location in the second Immunity Challenge.  (Note: “The sauce” does not work well at a flop wall.)

• James’ inability to hit inside 25 feet from the last location in the second Immunity Challenge nearly cost him dearly.  He went from firmly in control of his destiny to relying on others to bail him out - which they did.

• Despite his lack of confidence, Anthony continues to impress his fellow competitors with timely shots.  The shot that earned him immunity was actually the second time he hit the green in that playoff (during the second Immunity Challenge).  The first had to be cut do to time constraints.  Ray also hit the green once in that playoff, before eventually falling to Anthony.

• For the record, Chan does not eat extra grass when he is in the rough.

• Rick would later say that the most nervous he’s been on the show was when Brian reached out to shake his hand on the range right before choosing Ray to compete in the Elimination Challenge.

• Astute Big Break viewers may have noticed that the man Ray tackled in the preview show to get his black eye was none other than Matt Melrose, the South African native who competed on Big Break Ireland.  Ray and Matt have a regular game when they’re both home in Scottsdale.  It can get pretty ruthless.