Stats that will sock you 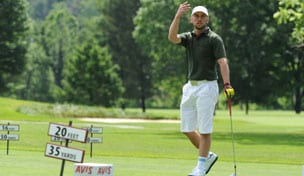 Let me get it out of the way – mid-range socks are making a comeback. I figured I’d experiment with it a little bit on the latest episode and from my Twitter feed apparently you guys don’t agree. While I’ll never force a trend on anybody, my intuition tells me that mid-rangers are coming back in style. People like to express themselves, that’s a given. Socks are just another avenue to express. Be prepared or you’ll get socked.

I have a confession. After missing those first two drives I was more than nervous, I was downright scared! At that point we didn't know what our totals were counting for, but I knew the total of 202 yards was not going to get me anywhere good. Luckily on the last drive I found the clubface with a really good drive (for me) and pounded one out there 299. Pound for pound, that's really good.

When we arrived to the second part of the challenge and learned what the rules were, it became quite apparent that this segment was the most crucial. Everything could change so quickly with an inch being the difference. All of us loved the dynamic of the challenge and watching it on TV was more exhilarating than expected. At one point, Mark had a shot that would put him into first or last. If you ain't first you're last.

I'm not going to sit here and tell you that I or the rest of us hit good shots from the 140-yard location. Even when I watched previous seasons I always thought, “This shot is easy! Anybody can hit it inside 20 feet from 140 yards.  For some reason it seems so easy when you’re watching it on TV because the benchmarks that are given look very attainable. You see, during the course of a round, you never think about how close you NEED to hit it, you just think about hitting it close. If you happen to hit it just outside 20 feet from 140 yards, who cares because with a good putt you could still easily make birdie. It doesn't even feel that bad.

On the Big Break however, with the scoring rings and yardage poles, the line between a defined great shot and a bad shot is so exact. Nineteen feet is great, 21 feet is bad. But really, is 21 feet that bad?

I decided to look up some stats of PGA Tour players from 125-150 and what I found was quite enlightening. Just take a look below. Rory McIlroy, for example, averages almost 20 feet on the same shots that we were hitting. Essentially that means he hits half of his shots outside of 20 feet from that distance. So when we’re up there hitting them just outside of 20 feet that really isn't that bad. We should be able to hit it inside regularly, yes, but to do it every time simply isn't going to happen.

When I calculated my numbers I decided, hey, why not take a look at the rest of the players. As a group, from 125-150, so far we have averaged 19.7’ (48 attempts). Individually, here are all the player’s average proximities (# of attempts in parenthesis):

Obviously this isn't a direct comparison to Rory McIlroy or other PGA Tour players because the scenarios are much different, but it does demonstrate that competitors on the Big Break aren't as terrible as many people think. If you read any of the commentary on Big Break’s Facebook page, you’ll see that many people think we’re terrible. Simply put – we’re not.

Before today I've never calculated my proximity to the hole from any distance. Researching the PGA Tour numbers made me realize that inside 20’ from 140 isn't that automatic. Had I known that prior I wouldn't have been so aggressive with my selections.

So in summary, my socks and our shots are better than you think ;-)