How to Be a Contestant on Big Break 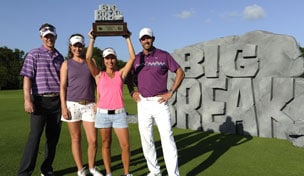 Big Break Mexico has come to a close, with a back and forth tightly contested match between Taylor and Matthew. It’s incredible to watch players battle it out with so much on the line. In her post-match interview, I asked Taylor about playing in the Lorena Ochoa Invitational, and she had worked so hard to block out all the prizes up for grabs that she had completely forgotten about winning an exemption into her first LPGA event.  Matthew on the other hand came up short after a terrific campaign. He definitely proved his mettle after fighting through 6 episodes and multiple eliminations without the support of a team. I think ultimately Team Maya was able to work together as a team more effectively than Olmec and Aztec, and it paid off at the end of the series.

As we finish this season and look to the next, I thought it would be a great opportunity to tackle one of the most common questions I get about the show as a producer, “How do I get on the Big Break?”

The first step is to be very good at golf. You have to have a good foundation to give yourself the chance to succeed. Along those lines, play some tournament golf. Playing golf and trying to make money doing it is the best preparation to handle the pressure of Big Break. I think a lot of viewers don’t appreciate how much pressure you’re under when you have to step up and hit one shot when it counts. We’ve had everyone from Yani Tseng, to Lorena Ochoa, to Hall of Famer Jerry Rice on they show, and every pro golfer and athlete has talked on and off camera about the incredible amount of pressure they felt.

Then you have to apply! Keep an eye on the Big Break twitter account and facebook page. That way you’ll always know when a call for applications goes out. Finally, if you get that email, audition. Show up and be yourself. Absolute best advice I can give. There’s no point in trying to be someone you’re not. We’re always looking for a mixture, so sometimes people who don’t make it one year, end up being cast the next. No reason to be discouraged!

That wraps it up for me. Thanks for watching, keep swinging, and we’ll see you next season! 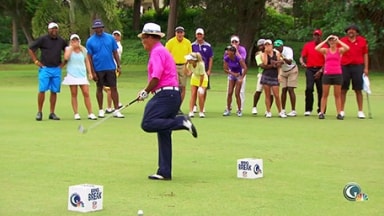