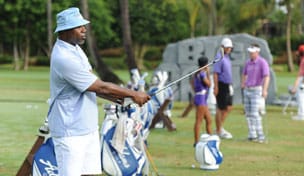 Getty Images
Fred Couples won the Masters in 1992 for his lone major and became the first American player to reach the No. 1 position in the Official World Golf Rankings since they debuted in 1986. (Weeks at No. 1: 16)  -

Any football fan of a certain age knows that was the famous mantra of late Oakland Raiders owner Al Davis.  NFL legends and current Big Break NFL competitors, Tim Brown and Jerry Rice played together for a few years on Davis’ team in the early 2000s.  They even lined up alongside one another for the silver & black in Super Bowl XXXVII (that’s 37, to non-Romans).

Some ten years later, as fate would have it, Brown and Rice have become the first two teams to earn losses in Big Break NFL Puerto Rico, which means from here on in each episode could be their last.  What’s in a mantra?

As Rice and Brown fight to avoid being booted from the opulent Dorado Beach Resort, another player—one who can’t count the Raiders among his three former NFL employers—has grabbed Just win baby by the horns and thrown it to the ground like countless quarterbacks who dared to drop back into his path.

Former defensive end Chris Doleman is developing a reputation for being as mean to his Big Break teammates as he was to opposing offenses.  But take it from someone who was there − things aren’t always as black and white as the Atlanta Falcons jersey Doleman donned in 1994 and ’95.

To be sure, Doleman may not be expecting Christmas cards from fellow blue teamers Brian Cooper and Shannon Fish, and they have earned the nickname “Team Turmoil”.  But, barring something very Big Breakish, their run on the series is now guaranteed to go at least six episodes.  Having interviewed Team Doleman for their entire run on the series, I can tell you there is definitely a kinder, gentler side to the man who once played NFL football with a broken tail bone.

During her interview in episode 3, viewers may have noticed a huge piece of jewelry on Shannon’s right hand.  Yes, everything is bigger in her home state of Texas, but that bling came straight from Pittsburgh, PA.  It was the national championship ring of late Pitt Panthers coach Joe Avezzano, whose son Tony happens to be Shannon’s boyfriend.  He gave it to Shannon to take to Puerto Rico as a good luck charm.

Doleman—who happens to be a University of Pittsburgh alum—has a similar charm, which represents more than a decade of good fortune on the gridiron.  It’s a Pro Football Hall of Fame ring, earned when he was inducted to the prestigious club last year.  It’s a priceless symbol of a career very well spent, and of which Doleman is rightfully proud.  And here’s an exchange that occurred just before our interview the evening of episode 4:

ME: What’s that ring?

CHRIS: Want to try it on?

I paused.  Heck, I’ll short-arm a NERF if you throw it too hard.  A Pro Football Hall of Fame ring, on my finger?  In my mind, that’s something that has to be earned.  Like the Stanley Cup.  A gold medal.  Or the Claret Jug.  That’s like sitting behind the wheel of your father-in-law’s vintage Jaguar.  You don’t just go around touching things like that without doing something pretty special.

After four seconds of consideration, I realized I’ll probably never be this close to that kind of hardware again.  I took the ring, and slipped it over my fattest finger.  And while it was still about 4 sizes too big, in my wildest dreams it was a perfect fit.

CHRIS: Go ahead and keep it.  Give it back to me tomorrow.

ME (in my head): What time does Positivo close?

ME, out loud (and in my head): That’s quite an offer.  But I do not want to be the guy that loses Chris Doleman’s Hall of Fame ring.  Tell you what, bring it to the interview tomorrow and I’ll just take a picture with it on.

He did.  I took three pictures.

How mean can someone be when he’s willing to let a guy he barely knows hang out with his Hall of Fame ring for a day?  Doleman’s compassion goes beyond hopelessly unathletic TV producers, too.  In January, he traveled to New Orleans during Super Bowl week – to help The Starkey Foundation provide hearing aids to needy residents.  The charity Doleman is playing for strives to make the world better by, among other things, helping at risk youth both at home and abroad.

Of course, what’s ultimately at risk on Big Break NFL Puerto Rico is Shannon’s and Brian’s collective sanity, and a chance to win it all if Team Doleman implodes.  So far, they’re just winning, baby.  Do the ends justify the means?  You may already have an opinion on that.  Is Doleman mad scientist enough to make it work?  Stay tuned.

Other interesting notes from episode 4:

- My personal favorite line from episode 4 was Mark Rypien’s response to his shot at the flop wall, which he admittedly caught a little heavy: “I’ve thrown many touchdown passes that weren’t spirals.  And I loved every one of those.”  (Honesty’s the best policy.)

- James’ holeout over the flop wall is the third such shot in Big Break history.  The others?  Ray Beaufils in Greenbrier, and none other than Will Lowery, whose shot from Indian Wells was replayed in episode 4.

* Watch out in future episodes for another player who had the foresight to bring a specialty club to Puerto Rico, and with much more favorable results.  Keep it here to find out who, and what club.

- Brian’s wedge − the one that sleeps with the fishes − was a 64 degree that he brought along specifically for the flop wall challenge.  You can understand why he doesn’t need it anymore.  In fact, Brian threw it in the pond as a favor to others.  He didn’t want the bad mojo to rub off on anyone else.  Allegedly.

- Emily’s celebration after earning immunity at the flop wall was a reaction to her poor play in the previous episode, and a testament to the intensity of the pressure players face on the series.  When asked about it, almost everyone was fine with that display of emotion.

- Mallory’s Driving Distance Average on the 2010 LPGA Tour was 243.8 yards.  She outdrove Juli Inkster, on average, by one yard.  The drive in episode 4 was into the breeze.

- On the first hole of Sudden Death, Tim’s bunker shot may have looked like the easier of the two for Team Brown.  But as we saw in episode 2, the bunkers on the Dorado Beach East Course can be somewhat unpredictable.  Mallory’s pitch shot was top-shelf.

- Coming into the series, Al Del Greco was widely regarded as the most feared NFL player on the cast.  That could change after this episode.

Editor’s Note: A previous version of this blog incorrectly stated that the ring Shannon wore in episode 3 of Big Break NFL Puerto Rico was Chris Doleman’s Hall of Fame ring.  The writer apologizes for the inaccuracy.