Some Things Don’t Go According To Plan 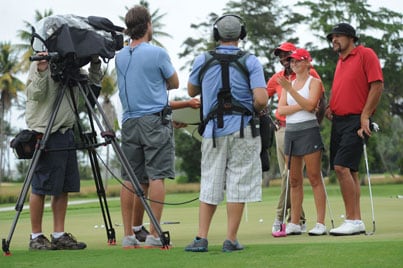 Getty Images
DUBAI, UNITED ARAB EMIRATES - NOVEMBER 16: A golfer plays from a bunker during the third round of the 2013 DP World Tour Championship on the Earth Course at the Jumeirah Golf Estates on November 16, 2013 in Dubai, United Arab Emirates. (Photo by Ross Kinnaird/Getty Images)  -

Such as in life as is in the world of recording a season of Big Break where despite our best efforts and months of planning, sometimes things just don’t go according to original design.

Now, some of you may be surprised to learn that Big Break is actually not a “live” show. I have actually had conversations with SEVERAL fans of the show who are amazed to see me the day a show is airing because they assumed I would be on location. I’m not judging of course, It’s just these usually logical people think we make some incredibly precise cuts and the players are commentating on their golf shots and the situations in real time. It’s funny.

The truth is we record one show per day over the course of 2 weeks usually about 4-6 months prior to the episodes airing. Each actual episode of just the golf (so not including interviews, makeup, meals, etc) takes about 7-10 hours depending on the amount of people left in the cast. After we wrap for the day, the contestants then go get showered, into make-up, grab some food and then go into an interview which lasts about 1- 1.5 hours. So all in, the contestants wake up around 4:45am and get to bed anywhere from 8-11pm. It’s a very full day for everyone involved.

I tell you all this, because the episode which aired this week was shot on somewhat of an ironman day. Meaning due to scheduling conflicts we had to finish shooting the series 1 day sooner than originally anticipated. This meant shooting 2 shows in one day.  When first approached with this proposition, I of course being the steadfast, hard-working, no nonsense, glass is half full guy that I am said, “you are out of your bleep bleep mind if you think we can do 2 shows in one day.”

Well... Turns out... We can! Not to say I would ever want to do it again, but it is in fact possible. However, you may have noticed some inconsistencies in our usual formatting of each show. Let’s review. No breakfast to start the show.  No long shadows at the beginning of the show which would indicate a rising sun in the morning (the cloudy day helped mask this some) By the end of the show, there was virtually no daylight left since we started shooting this show at about 1pm. (this gave it a cool moody effect for the goodbye shot, but made the cart ride back to the clubhouse fairly risky.) We only actually had two challenges in the show rather than our usual three. (in between each challenge, the players go back to the range to warm up and we move our giant circus to the next location for the next challenge which typically takes 45 mins to 1 hr. So... less challenges means less time in repositioning. The contestants look generally exhausted (because they were).

All in all however, everyone on the cast and crew pulled together and we got a great show out of it. I was surprised to see a team go home that I thought was a contender but it’s something I have seen time and time again on this show. And thus, we have come full circle.(remember that thing I said earlier about things not always going according to what we think will happen?)

Until next time, Chris Graham 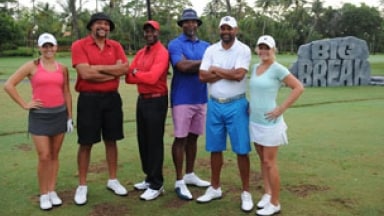 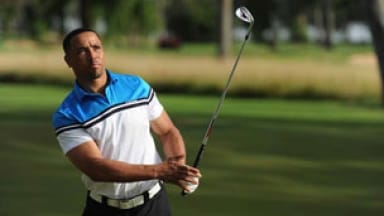 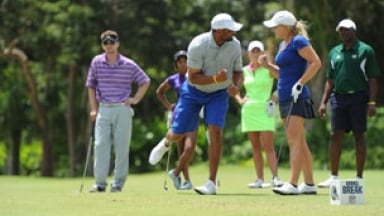 One Big Break NFL Puerto Rico producer gives you some insight as to what happened during the taping of the eighth episode.