The Best View in the House 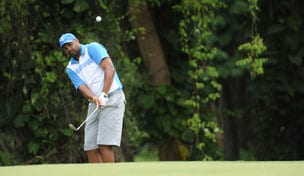 Getty Images
GUADALAJARA, MEXICO - NOVEMBER 14: Michelle Wie of the United States lines up her second shot on the 11th hole during the third round of the Lorena Ochoa Invitational Presented by Banamex and Corona at Guadalajara Country Club on November 14, 2009 in Guadalajara, Mexico. (Photo by Kevin C. Cox/Getty Images)  -

You might be surprised when I tell you that in the world of reality shows, Big Break has a very large crew. It takes a little over 100 men and women to put all the puzzle pieces together that provides you with what you see on the television screen each week. We move around the golf course like a well trained army of ants, all carefully choreographed to single file cart path driving (73 carts on a hole at a time). And all but maybe 5 people have firmly attached to their hip a walkie talkie that has a tethered earpiece connecting us all to the ever progressing stream of consciousness that is Big Break.

Of course during the course of the day there is all kinds of radio chatter. Anything from the food/beverage cart needs ice, to “uh... one of our contestants has appendicitis” (actually happened) can be heard over the radio waves inside our production cocoon. During the challenges however, the majority of the crew is tuned into good old channel 3. Of which, I have the distinguished pleasure of being the voice of description. Before and after every shot I describe what is happening in as much detail as I can. This is mainly so our dutiful scribes can furiously scribble down the notes of every shot, comment, yardage, and any other pertinent information that will be used for that day’s interviews. But it is also because we simply can’t fit our entire crew on the course at each of the challenge locations, yet, they still want to know what happens. So they can tune in and I deliver a blow by blow of what happens during each show.

Without fail, there are special times each season, where something will happen that will cause an audible gasp or general sigh of awe from the crew. These are the moments when I find my words get involuntarily louder and excited. I distinctly remember describing Brian’s shot after Emily had hit her shot onto the green in this week’s Sudden Death Challenge and it went a little something like this:

Me: Ok, Emily is on the green, she has about 20 feet and now Brian is pretty much screwed over there in the hazard. He’s got 111 yards to the pin, 96 yards to the front, and I would be shocked if he gets this on the green. He has a tree limb hanging in front of him that he will have to keep it under and IF he is able to do that he will have to avoid the downslope in the fairway if he is going to keep it anywhere short of the back of the green.

Another Producer: What was that yardage again?

Another Producer: Copy that.

Me: Ok, Brian is getting set behind the ball and he is checking out what kind of swing space he has. He should have a pretty free and clear swing here.

Safe City Producer: Shannon and Doleman are looking pretty anxious over here. And Isaac just told Jerry about the time Brian saved himself from the long grass at Greenbrier.

Me: Ok, Brian is getting settled over the ball, oh nope, he has backed off. Having a hard time getting his nerves settled. Emily is standing by her cart looking pretty relaxed. She told me in the fairway that she wanted to beat him so bad. Ok, over the ball.... and ball is in the air..... this is gonna fly too far... wow perfect actually... this could... holy crap that thing is gonna be just perfect! (I hear gasps and “oh wows” from other crew in my general vicinity)

Me: (louder and more excited now)Incredible shot by Brian Cooper and Emily can’t believe it. Look at that! It’s right beside the hole!

Safe City Producer: Nice reactions up here from everyone. How close is that?

Me: 4, maybe 5 feet tops. Which is crazy considering where he was. I am going to guess he will call that the best shot he has ever hit. (He didn’t. He still thinks his shot at Greenbrier from the rough was better. I disagree.)

At this point Brian walks out of the hazard he was in and gives me a wry smile and wink, which is a rare break of his usually focused demeanor when he is in competition.
In the end, Team Doleman remains Lossless and I have no doubt Coop will tuck that moment away in his mental bank of truly great shots and he was not finished yet. He gave us a few other reasons to gasp this season. But you will have to wait for that...