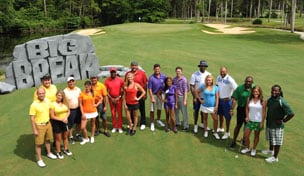 Stop me if you have heard this one. 6 former NFL players and 12 former Big Breakers walk into a bar in Puerto Rico...

Well, it happened. I saw it and actually walked in right behind them all the while thinking, there is the beginnings of a good joke here.

We knew we wanted the 20th season of Big Break to be a special one. In the television industry it is extremely rare for a show to make it this far and Big Break keeps getting stronger. This season was a culmination of months and months of planning and preparation that brought us to the Dorado Beach Resort in Puerto Rico. When we reached an agreement with the NFL, we as producers of the show wanted more than anything to have the NFL players truly experience what it means to be on Big Break. But the only way to do that was to find NFL players that could golf well enough to have a challenge on their shoulders and still have the ability to pull off a shot. We were surprised at how many football players were fans of and really wanted to be on the show. That was very evident when I was sitting with the NFL players during our reveal to the Big Breakers at the beginning of the first episode and I thought it was kind of funny to have these big very accomplished men saying how nervous they were to meet their teammates. Just goes to show you even the best of the best get nervous sometimes. Even Jerry Rice, who was definitely not showing his nerves did make a comment right before he went out that he was feeling a little “pre-game excitement”.

What you won’t see in the first show is after the teams met on the beach we sent them out for a practice round as teams. This gave people like Isaac and Emily a chance to get used to the fact that they were in fact on a team with Jerry and also give them all a chance to get to know each others games. We knew we had some strong golf games and some strong personalities and it was interesting as I drove around the golf course and watched each team for a few holes and noticed how the team dynamics were taking shape early on and it was a fairly accurate depiction which you will see as the season goes on. This is the first time we have had the teams live and die as teams. And we have brought back 12 of the most popular (for better or worse) players to share their BB expertise and see if they themselves can go the distance this time around. The NFL’ers brought their own level of expertise as well. All of them are so indoctrinated in the “team” frame of mind, whereas golfers by nature are much more individualistic due to the nature of the game. So this setting definitely set up to let the football players lead their teams into victory.

Of course I can’t give away any of the challenge specific details because where is the fun in that? But what I can tell you is we were surprised on more than one occasion. You will see team triumph and team drama. One team is actually nicknamed “Team Turmoil”. You will see hole outs (yes plural). You will see good shots and you will see great shots. And yes... you will see some spectacularly bad shots. It’s all a part of the Big Break experience. 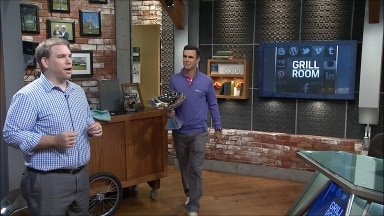 This week's Grill Room episode includes cameos from Billy Horschel, Jerry Rice and an overserved European team in the wake of their Ryder Cup win. 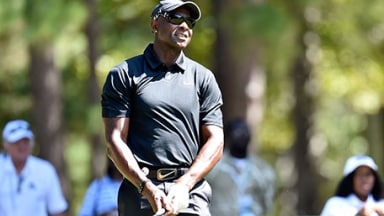 Jerry Rice won't be advancing to Round 3 of the Big Break Invitational Reynolds Plantation, but he's gracious in defeat. 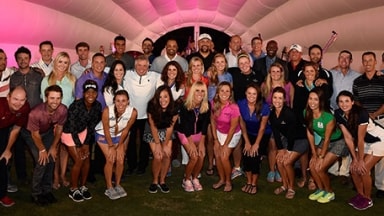 Forty former contestants. Head-to-head competition. Winner gets $100K. 'Big Break' is back and better than ever.