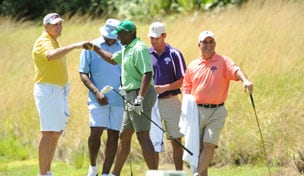 Getty Images
Tony Jacklin shows Michael Breed how he starts his game on the range of Golf Channel Academy.  -

The first day of shooting always brings with it a variety of sensations: excitement, anticipation, uncertainty, nervousness––maybe even nausea.  And that’s just the producers.

Of course, the players were noticeably anxious on the first day of competition.  As they would attest later, there were dry mouths, shaky legs and spaghetti arms.  There were butterfly-filled stomachs and pounding hearts.

The anxiety amongst the production team was in finding out if the NFL’ers were buying into the whole Big Break idea, or if this was just a two-week vacation at an incredible destination with some golf fun and games mixed in.  To have a watchable series on our hands, the consensus was that the NFL legends had to go all-in.  They could not be merely celebrity Big Break contestants; they had to be full-fledged Big Break contestants.

After nineteen successful seasons, we were pretty sure had a good thing going, and we knew these guys were all fiercely passionate when it came to football.  But would they pursue our golf skills challenges with the same fervor?

It didn’t take long to get the answer.

To hear Al Del Greco admit that the exhilaration he experienced in the glass break outweighed anything he’d experienced while kicking a game-winning field goal was an eye opener.  To hear Super Bowl MVPs Jerry Rice and Mark Rypien compare the glass break to one of the world’s biggest sporting events were serious signs of success.

Having played in front of millions of fans over their collective careers, it was interesting to see the NFL legends exhibit the same symptoms of nerves that all Big Breakers do.  What we had hoped, and what the very first challenge of the combine helped to confirm, was that world-class football players are like world-class golfers: competitive at everything they do.  Whether its scoring touchdowns, throwing darts or breaking glass, as Marc Bulger puts it, “losing is unacceptable”.

That mentality is what made them NFL legends in the first place.  But will it make them Big Break legends? Time and ten more episodes will tell.

To make the Big Break Hall of Fame, the NFL players will not only have to hit timely golf shots.  They’ll have to be good teammates – and they’ll have to rely on the returning Big Breakers who are now their teammates.

It won’t always be easy.  Just ask Tim Brown.  As he sat in the holding room awaiting the big moment of the NFL players’ reveal to the former contestants on the beach, a thought occurred to him.

Aware that golfers are not always the most gregarious of athletes, Tim warned his fellow NFL alumni “You know, there’s a possibility that they may not want us to be here.”  As you saw in episode 1, Tim’s words hit close to home, as both Mallory and Will admitted to struggling with the idea of playing as a team.

Their concerns are not unfounded.  The combine showed that a weak link can drag a team down, like Meghan and Will did in the glass break.  Similarly, a strong player can lift a team up, as Stefanie did in the approach challenge and Isaac did on the putting green.

Throughout the season, all 18 players will walk the delicate line between individual effort and team chemistry.  It won’t always be pretty.  But one thing is certain: the anxiety will be high.  And the competition will be real.  And intense.  It’ll be real intense.

That’s what happens when the contestants are all in.