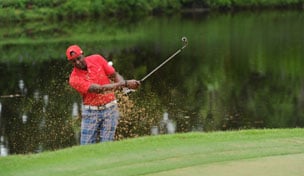 With so many retired NFL stars roaming around, how can I possibly avoid football analogies?

This week’s episode is truly where teams and individuals square off.  The combine, warm-ups, scrimmages and practice rounds are all over.  Skills and dispositions have been assessed.  No more ‘advantages’ or ‘disadvantages’ as consequences of play performance – today, someone is getting a loss.  In as much as we’ve all prepared for this day, truly… anything can happen – and it did.

For those of you that were skeptical about the skills of our retired NFL players, what do you think now?  Did you expect Del Greco and Rice to have that kind of skill on the increasing lengths challenge?  It’s one thing to muscle out some distance with a driver, but placing a ball where you want it to go with finesse is another story altogether.  These guys are players.

We’re all truly excited about the level of competition at this point, because… in all honesty, we really didn’t know exactly what we’d get from our NFL heroes.  Now we know that the competition is going to be fierce and high-level.

Here are a few notes I jotted down during shooting this episode:

- What is happening with Team Doleman?  Some dissention?  Who is the leader?
- Zakiya - a dangerous player.  No one wants to go up against her.
- Team Brown is mentally strong.  Down, but far from out.
- Weak links are starting to show.  Who will gel to overcome them? Yellow looks capable.
- Rice and Del Greco look strong.  Contenders.

As in the first quarter of most football games, the opponents are testing each other.  They are trying some plays, learning how to work as a team, reading their opponents strengths and weaknesses.  Strategies are forming.  Personalities are starting to show – for better or worse.

There is one thing that I can reveal about upcoming episodes of Big Break NFL Puerto Rico: there is some great golf coming your way…. so, keep watching!