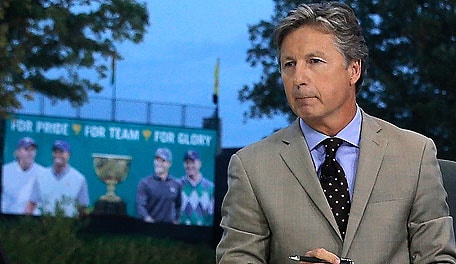 In my first year as a commentator I received some impassioned advice about how I should approach the job. It was 2003 and I was still playing a few events on the PGA Tour. During the third round at Colonial I was walking off the ninth tee with a five-time Tour winner whom I had known as long as I had played golf. We were talking about the people in the profession I was joining.

“I hate Johnny Miller,” my fellow Tour player said. “Whatever you do, don’t be like him.”

“Because he thinks he knows everything.”

This opinion was nothing new on Tour. A lot of players took issue with Johnny Miller and his candid – some would say caustic – comments about their games. He had even caused blood to boil within my own family.

In 1999, I was in fourth place going into the last round of the Arnold Palmer Invitational. When I went to the water-fraught, par-5 sixth hole, I was just one shot off the lead. I hooked my tee shot into the drink, and Johnny said that the pressure of the hole and being close to the lead caused me to get quick, which led to the hook. Watching at home, my father seethed. I finished in a six-way tie for fifth.

As I was driving from Orlando to Ponte Vedra Beach, Fla., for The Players Championship, I called my father. He was still steamed at Johnny for presuming to know what had caused my disastrous drive.

“He said you choked, Brandel,” my dad said, but before he could go on I interrupted him. “I did choke,” I said. “Johnny was right.”

Whoever is sitting in the analyst’s chair on a TV broadcast – be it Johnny Miller for NBC, or me for tournaments shown on Golf Channel – has a difficult, often thankless job. We have to know something about every player in the field. We have to know when they’ve changed coaches, managers, world ranking, swings, shot shape, clubs and caddies. We have to know the course, weather, hole locations and breaks of the greens. And we have to be ready for every conceivable situation that a player might face from Thursday to Sunday and be able to spit all of that out in 10- to 30-second sound bites.

Before I go on, let me make this clear: I am not complaining about the demands of my job. It’s a great job. But it’s often misunderstood and I’d like to clear up some of the biggest misconceptions.

The “what” – what club, what coach, what hole, what shot – is easy. The hard part is trying to understand and communicate WHY a player hit a particular shot, won or lost an event, changed coaches, plays a hole well or poorly, etc. Anybody can tell you WHAT happened: He hit 70 percent of the fairways today. But to explain WHY someone hit 70 percent of the fairways, when the day before he hit only 50 percent, or why he had 25 putts when he averages 29, or why he had five top-10 finishes last year when the year before he had just two, well, you have to do more than read or listen; you have to think, perhaps even guess a little and then give your opinion. Hopefully this opinion survives a collision with the evidence, but as an opinion, it’s still open to debate.

Johnny Miller is the king of saying why something happened. This infuriates many players and viewers, but what the players don’t get is that Johnny is not commentating for them. He is talking to millions of viewers. As a colleague is quick to say when confronted by an irate Tour player, “I had your job for 20 years; you haven’t had mine for two minutes.”

I have now been doing TV for 13 years and I could write a book about all the mistakes I’ve made.

Early on I was calling a tournament in Las Vegas and all the players had pink ribbons on their hats for Breast Cancer Awareness. As the camera zoomed in on one of the hats, I was supposed to talk about the significance of the ribbon. I said, “The pink ribbon is to bring attention to Breast Awareness Month.” Now, the word CANCER is fairly important to that phrase. I was unaware I had left the word out and had no idea why my producer was yelling in my ear.

Misspeaking is one thing and, depending on the faux pas, usually forgivable. Being flippant, on the other hand, is almost inexcusable.

During my PGA Tour career, I played a lot of golf with Dillard Pruitt. He had this big lateral shift off the ball and almost no hip turn, but he could hit the ball as straight as anyone I had ever seen. I once saw him win a bet by hitting a particular mower strip in the middle of a fairway.

I always teased him that he was a “rock and blocker,” and I would imitate his swing to make him laugh. Fast-forward to a Live From segment on Golf Central from the PGA Championship one year. We were running a piece on the great teacher Jimmy Ballard, who is famous for teaching a lateral shift off the ball and then back into impact. As we came out of the piece, I had maybe 30 seconds to button it up and said something about Jimmy teaching a rock-and-block golf swing.

The next day, I heard through the grapevine that Rocco Mediate and Jimmy Ballard were upset with my description of their philosophy. It killed me because I respect both of them greatly and believe there is validity to their ideas. If I upset someone because I differ with them, or because I have an opinion about their golf game, that is one thing, but to not give my full consideration to the time allotted for someone’s story is just wrong.

People often ask me how I make it through the long weeks of major championships when we are up at 5 a.m. and don’t get done until late at night. I always say, “segment-by-segment,” which is basically from commercial to commercial.

Each segment of a studio show has a talking point, and I dive in and try to tell the audience something they don’t know, which almost always involves me giving my opinion

The host might ask me, “Why doesn’t Charles Howell win more golf tournaments?” I hate questions like this because I really like Charles Howell and I don’t want to say anything to upset him or his family, but I have to give my opinion, so I try as hard as I can to give an educated opinion and to be fair. Then five minutes later I might be asked another question: “Brandel, how come Tiger changed his swing in 2010 and is this swing as good as his 2008 swing?”

I can’t just say “he changed his swing to get better”; why would anybody change to get worse? I have to look at this new swing and compare it with the previous one and to the one before that and then do countless hours of research and give my opinion. This involves some guessing, obviously, but I am paid to guess to some extent in every opinion I give. And then a few minutes later I am asked to give another opinion.

When I played the Tour I worked hard. Maybe not Vijay Singh hard, but not far off. What I liked almost as much as practicing was the camaraderie of the Tour. What I do now is a long way from the levity of being in the company of 155 men with a common interest, but one thing hasn’t changed: I work every bit as hard now as I did then. It might look easy to sit in an analyst’s chair and be critical, but nothing could be further from the truth. 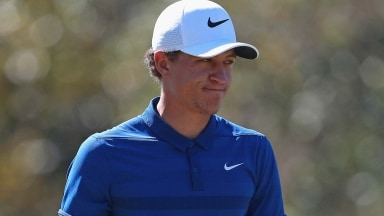 PGA Tour prodigies having incredible swings at a young age is nothing new. And the latest sensation taking over the Tour, Cameron Champ, seems to be cut from the same cloth. 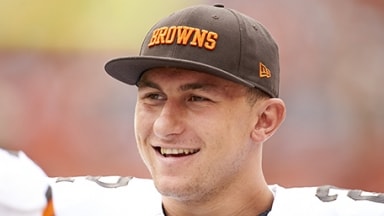