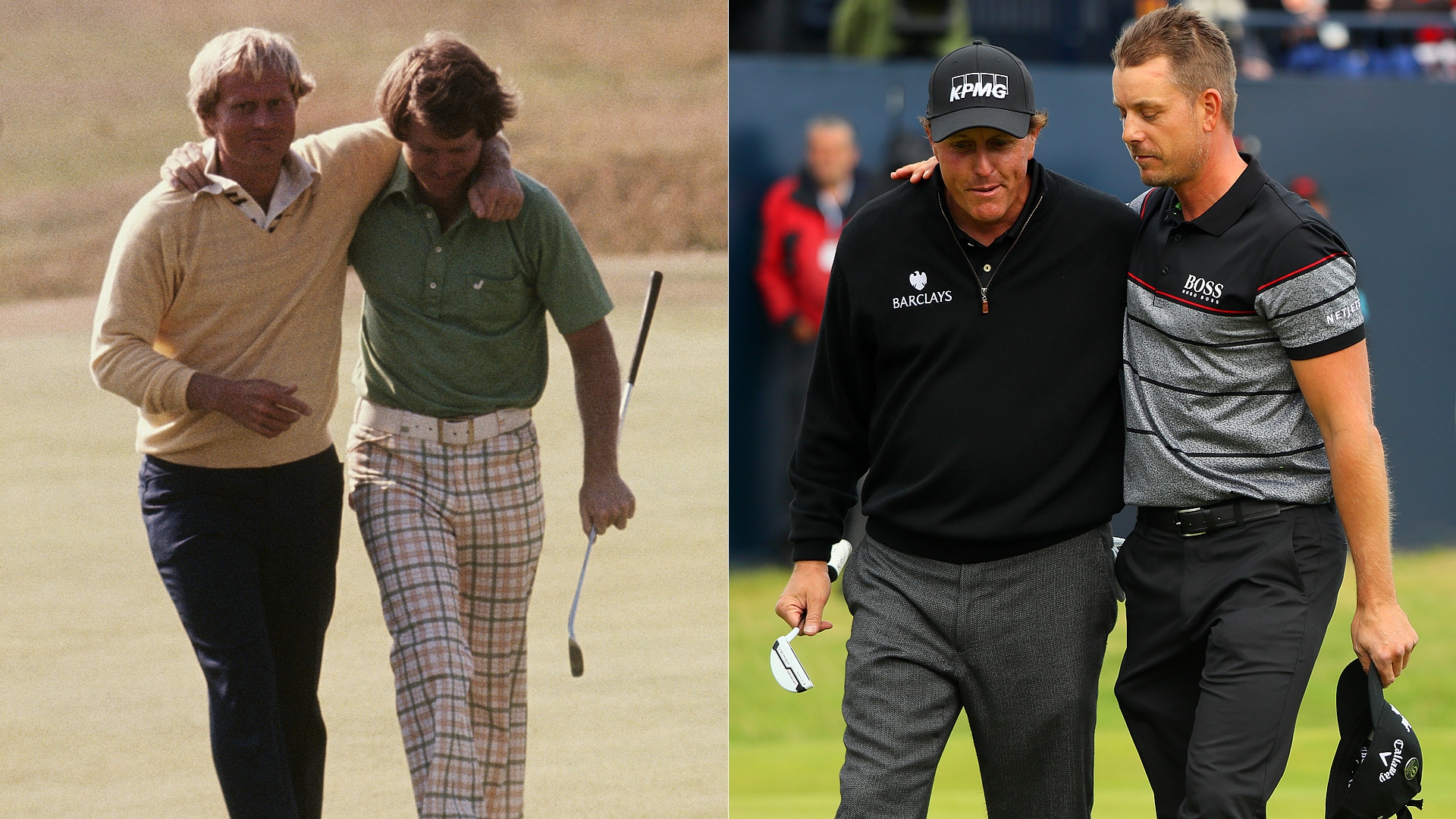 There they were, fighting Mother Nature and Father Time, Henrik Stenson and Phil Mickelson putting on a show that had us stammering to name it before it was over.

Was it the Royal Boil? The Fray on the Firth? The Melee in the Mist? The Back and Firth? The Royal Row?

Oh, hell, whatever you want to call it, it was one helluva show.

Before Sir Henrik of Stenson hit that last putt I was flat out Swedish fishing to put it into perspective, too. Was this better than the Duel in Sun?

Maybe … YES SIR! … He made the putt! He shot 63! Of course, only one man had ever done that in the final round of a major to win and as luck – fate, NBC and the R&A – would have it, he was on the call. Who better than Johnny Miller to tell us what it feels like to shoot 63 in the final round of a major to win? Not only had he been there, done that, he was at the Duel in the Sun where the final big yellow leaderboard looked like a stroll through the Hall of Fame. Right there in the top 10 with Aaron Burr and Alexander Hamilton, ‘scuse me, Tom Watson and Jack Nicklaus, were Hubert Green (who had just won the U.S. Open), Lee Trevino, Ben Crenshaw, Arnold Palmer, Ray Floyd, and Miller, the defending Champion Golfer of the Year.

It is peculiarity of people, myself included, that we tend to bestow originality on the most current events, especially sporting events, and in our fervor say they are the best we have ever seen. We did it after the 106th Open in 1977 and we are doing it now as we sum up the 145th. Even the stars of the Duel, Nicklaus and Watson, have chimed in and are saying the Henrik and Phil show surpassed theirs.

Before I agree or disagree I figured I would do a little digging, or adding and dividing as it were. Here’s what I found:

Having won 14 majors before The Open in 1977, Nicklaus was the greatest major champion of all time. He was 37 and only a few years removed from the prime of his career. Watson was 10 years younger and in April he birdied the 71st hole of the Masters to take a one-shot lead over the Golden Bear, who was addressing his approach shot into 18 when Tom’s putt went in. Jack backed away at the roar and then after settling in again, fatted his approach and made bogey. Tom won by two.

It was the 13th runner-up finish in a major for Jack. It was the second major win for Tom, who would go on to become the most prolific Open champion in U.S. history, arguably one of the top 10 greatest players of all time – and along with Trevino (Nicklaus would finish runner-up to both four times in the majors), Jack’s biggest nemesis.

Mickelson, has won five majors. He is 46 and the sun is setting on his career. Stenson had never won a major before this year’s Open and at 40, he is not likely, historically and statistically speaking, to win another. Phil might go down as one of the top 10 players of all time, but in my opinion, to crack that list, he still has some “major work” to do. Henrik is the first male from Scandinavia to win a major and given his driver yips of a decade or so ago compared with his Hoganesque tee-to-green work now, his almost $11 million that Allen Stanford Ponzi-scammed him out of, and his practical joke nature, he is a compelling figure in many ways. But in no way comparable to the foil or the player that Watson was.

This Open had no Nicklaus and no Watson.

On the Sunday of the Duel in the Sun, Nicklaus was three up after four holes and then Watson birdied three of the next four to pull even. At the far point of the course, as they walked down the ninth fairway, the frenzied gallery broke through the ropes and rushed past Jack and Tom. Nicklaus’ caddie, Angelo Argea, said after that he thought Jack was going to get trampled and it took 15 minutes to clear the fairway. Jack sat on his bag. Tom stood and waited and then bogeyed to lose the lead. Nicklaus birdied No. 12 from 22 feet to go two up. Watson birdied No. 13 from 12 feet, and then a haymaker for birdie from 60 feet at No. 15 brought them all square.

As the two waited on the 16th tee, Tom said to Jack, “This is what it’s all about, isn’t it?” To which Jack answered, “You bet it is.” Pars at No. 16 kept them even. On No. 17, a driver and 3-iron gave Tom a look at eagle on the par 5, while Jack had little more than 3 feet for a 4. Tom missed and tapped in for birdie and then Jack missed the only putt anyone can remember that he needed to make.

Tom chose a 1-iron at the last and found the fairway. Jack hit driver, blocked it to the right and finished just left of the gorse. Tom hit his second tight and Jack, having to make a contrived backswing to miss the gorse, sent fescue flying and his ball finished 35 feet. It looked to be over.

As Tom was walking toward the green he turned to his caddie Alfie Fyles and said, “Nicklaus is going to make that long putt, I know him too well.” Right on cue, Jack made the putt and then almost in tandem, as he was quieting the crowd Tom tapped in for a one-shot win.

In one of the most memorable acts of sportsmanship anyone can remember, Jack put his arm around Tom’s neck as the two walked off the green.

Sunday at this year’s Open began with an anticipatory nostalgia and a parallel flirtation with the Duel in the Sun. Henrik and Phil were six and five clear of third place as they teed off. Phil stuffed his approach at the first and Stenson missed a par putt from 6 feet, and their roles and the arithmetic were reversed.

Stenson birdied four of the next five holes. Phil had an eagle and a birdie in that stretch, and they were all square as they played the shortest hole in The Open rota. Stenson birdied the Postage Stamp par-3 eighth to go one up and that’s how they turned.

They traded birdies at No. 10. Stenson bogeyed for the second time of the day at No. 11 and they were all square again. At No. 14, the Swede made a 20-footer to go one up and drawing yet another comparison with the Duel made a 50-foot putt for birdie from just off the green at No. 15 that put him two up. Phil’s eagle putt at the par-5 16th missed by the narrowest of margins and Henrik holed his 6-footer for birdie. They both parred No. 17 and so with one hole to go Stenson had a two-shot lead on the 18th tee.

Stenson took less than driver off the tee and stopped just short of the pot bunker on the right that Greg Norman so famously found in the playoff in 1989. Phil found the fairway, and hitting his approach first had the chance to put pressure on Henrik, but came up some 40 feet short. Henrik’s second finished 15 feet away. After Phil missed, the outcome, which even a three-putt wouldn’t change, was clear, but Stenson’s 15-footer gave him a piece of history and history outright. He is just the second man to shoot 63 in the final round of a major and his 264 is the lowest score in major history.

Watson’s score of 268 was the lowest score by eight shots in the history of The Open. Stenson’s score of 264 bettered the mark, which had previously been lowered by Norman to 267 in 1993 and tied by Mickelson this year, by three.

Watson’s and Nicklaus’ back and forth, where Nicklaus had the lead for 12 of the 18 holes, with Watson only gaining the outright lead at the 17th and being pushed to the final putt, was comparatively more in doubt than Henrik’s and Phil’s. Phil had the outright lead after only one hole, that being the first and trailed by two at the last and lost by three.

Henrik and Phil, with a palpable generosity of spirit all day, did their part to uphold the traditions of this game, just as Tom and Jack did 39 years before, with the exchange that Watson and Nicklaus had on the 16th tee so wonderfully summing up what they were doing. Like a magnifying glass focusing light from the sun, they were putting all of their energy into a task, and yet were not so focused on what they were doing, that they couldn’t pause to enjoy it and provide it with their own legendary commentary.

Among the gobbledygook athletic idioms passed from one generation of kids to another, like grandfather’s watch, is that nobody remembers who finished second. Au contraire, even if the Back and Firth lost to the Duel in the Sun, nobody will ever forget it.