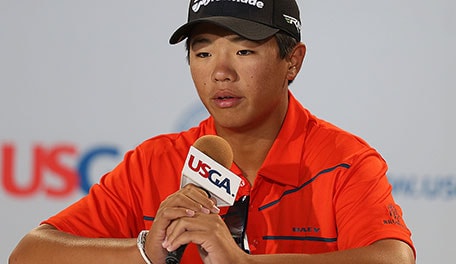 Better days are ahead for the Florida men’s golf team.

The Gators on Tuesday received a verbal commitment from Andy Zhang, the No. 1-ranked player in the Class of 2016, according to Golfweek magazine.

Zhang, who qualified for the 2012 U.S. Open as a 14-year-old, is merely the latest addition to a Florida team that seems poised for marked improvement in the coming years.

A perennial contender, the Gators have failed to live up to expectations over the past few years. The brief downturn didn’t stop a few top-ranked recruits from committing to play their college golf in Gainesville, most notably Sam Horsfield (who would be the No. 1-ranked junior in the country if he played enough events to qualify) and No. 2 Jorge Garcia.

The Gators also have commitments from No. 97 Kyler Tate and No. 196 Blake Dyer. (Another highly rated Florida commit, Kristian Caparros, will turn pro after his senior year of high school.)

Buddy Alexander, the two-time NCAA champion coach who had been with the program for 27 years, retired last summer. He was replaced by former UNLV assistant J.C. Deacon, but Horsfield and Garcia remained committed to Florida despite the coaching change. Zhang is Deacon’s first 2016 commit.

His future teammates weighed in on Zhang's decision on Twitter:

Congrats to @AndytheZhang for committing to Florida! Time to win some championships

The Gators are currently ranked No. 51 according to Golfstat, after a fall season in which they earned a pair of runner-up finishes but also finished outside the top 10 in two events. They failed to qualify for the 2014 NCAA Championship, ending a 13-year streak.