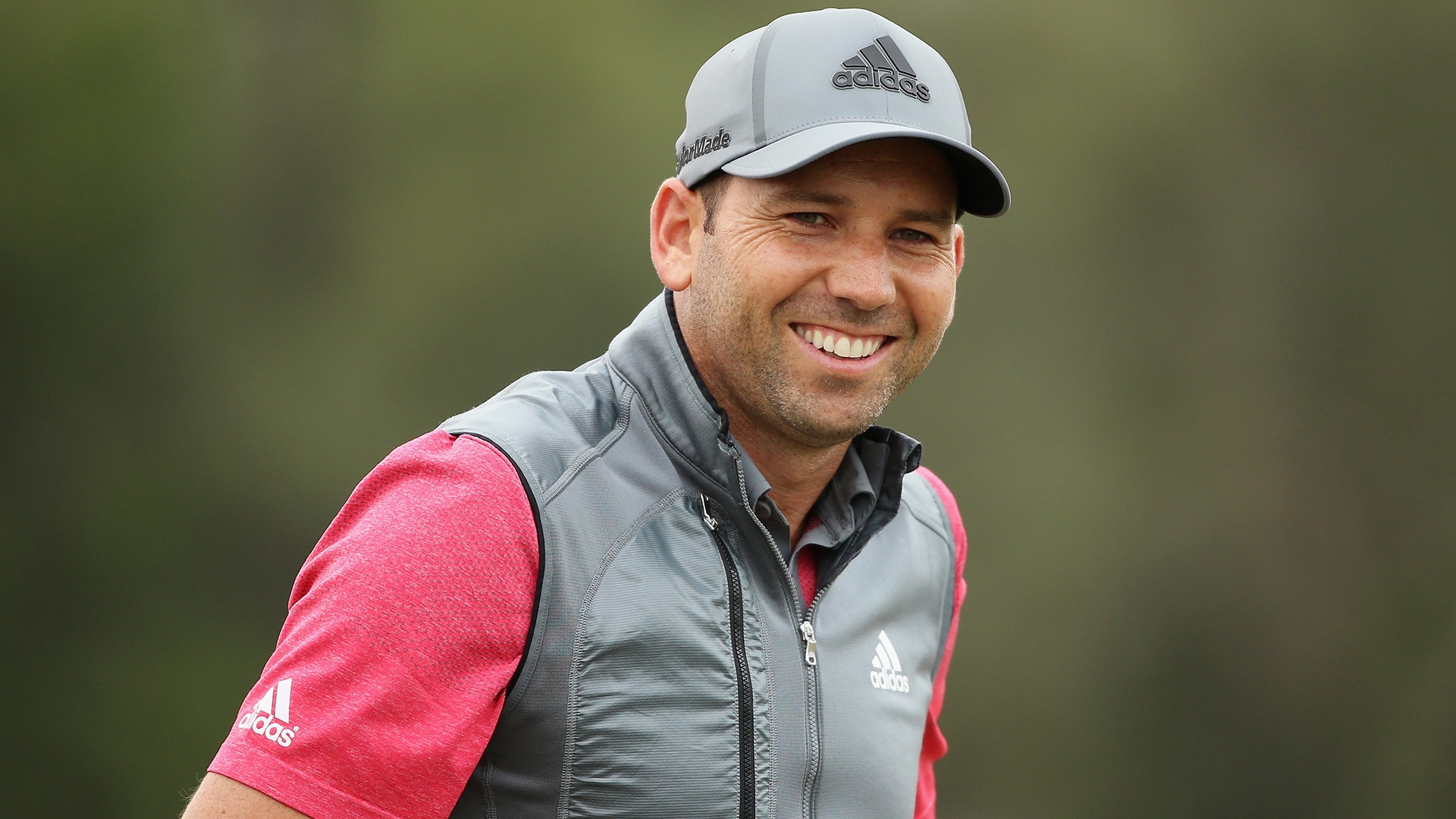 One of the last shared moments of joy between Sergio Garcia and Tiger Woods happened nearly 17 years ago in a Chicago suburb.

Garcia had just scissor-kicked his way into our golf consciousness, pushing Woods in a way that few have, before falling short in the PGA Championship at Medinah Country Club by one shot.

The 23-year-old Woods – his shoulders slumped after the weight of winning his second major – spotted the 19-year-old Garcia off the 18th green and embraced his young pursuer.

Garcia thanked him, patted Woods on the shoulder, and the golf cognoscenti started fitting Garcia for a closet full of green jackets.

One of the lone voices of caution came from one of Garcia’s boyhood heroes, someone who knew the grind of championship golf – and life – as well as anyone.

“I think when you’re a 19-year-old, you have no fear, have you?” Jose Maria Olazabal said at the WGC-Bridgestone Invitational, days after that PGA. “You don’t have anything to lose, nothing to lose. There is no pressure at all. No responsibility. And I think he’s taken advantage of it.”

Earlier that spring, Olazabal had found the resolve to win a second Masters, overcoming a back injury that was originally diagnosed as a foot ailment. He’d spent part of the mid-1990s sitting in a dark room, unable to walk, let alone play golf.

Pressure? Olazabal had lived it. He knew that a teenager simply could not fathom it, not yet.

“The picture might change in a couple years time – three or four years time [when] everybody will expect him to win every tournament that he tees off,” Olazabal said then. “Sometimes you don’t feel comfortable in that situation.”

He has been a central figure in golf for nearly two decades – as a foil to Woods, as a brilliant Ryder Cup performer, as a Players champion – and yet the game's most important threshold continues to elude him.

One of the game’s most accurate players at his height – Garcia led the PGA Tour in greens in regulation in 2005 and was fourth in 2004 – he has played in 69 majors, logged 20 top-10s, 10 top-5s and four runner-up finishes, but somehow has failed to solve the riddle of the game's most important examinations.

At the dawn of another major championship season, the 36-year-old Garcia has been overshadowed by an influx of 20-somethings in a generation he was once predicted to thrive in.

Tormented by Woods in his formative years and by Padraig Harrington in his prime, Garcia arrives to Augusta National Golf Club for the 80th Masters with little to no fanfare, while Rory McIlroy, Jordan Spieth and Jason Day have combined to win five of the last six majors.

"I just think his time has passed," Lanny Wadkins, the World Golf Hall of Fame member and 1977 PGA champion, says now. "When you stop and think of the things he's gone through, I think he has some demons. Big-time winners don't struggle taking the club away. From a ball-striking perspective, I think he's very one-dimensional. Sergio's putting stroke looks better, but it doesn't look as solid as a guy like Adam Scott. There's still a little 'wish' in there."

Hank Haney coached Woods from 2004 to 2010, including at the 2006 Open Championship at Hoylake when Woods was paired with Garcia in the final group. The anticipation that Sunday was thick, but two quick bogeys in the opening three holes removed Garcia from the fight. Woods shot 67, Garcia 73, and Woods won his third claret jug.

"To win a major, usually you have to make two putts on the last three holes, and that was hard for Sergio for a long time," Haney says. "He's better with the claw [putting grip], but opportunities passed before his putting improved. He would need the week of his life, with a host of other players being off their games and a big list of players not having the week of their lives. That makes the odds very low that, despite Sergio's greatness, he will ever win a major. They only play four a year."

The “best player without a major” conversation is one of golf's most unrelenting. Tom Kite endured it. Corey Pavin. Adam Scott. (At the 2010 Players, Scott called himself and Garcia, a good friend, "the young guys with gray hair," referring to their pursuit of a major, which Scott finally won at the 2013 Masters).

Phil Mickelson, burdened by both his PGA Tour win as an Arizona State junior and the endless comparisons with Woods, would joust with the media over the long-time gap in his resume before breaking the seal at the 2004 Masters.

Mickelson learned to embrace the challenge of competing in the Woods era. Garcia has bristled, spending nearly half his life spinning the dial on an unopened lock.

In the midst of a slump in 2010, Garcia's peers came to his defense. Lee Westwood, himself without a major, said Garcia only needed a boost in confidence. Garcia's countryman, Alvaro Quiros, a six-time European Tour winner, said the comparisons of Garcia and Woods were unfair and would have humbled the strongest of men.

"We are speaking of the greatest player of the world in history, Tiger," Quiros said then. "This is a very, very heavy stone."

It’s not that Garcia didn’t try and carry it, but he often added unnecessary weight.

At the 2002 U.S. Open at Bethpage Black, where he fought a vicious case of waggling and re-gripping, he complained that rules officials would have called play in the second round had Woods been in the rainstorm that pelted his tee time.

Their frosty relationship reached its nadir on Saturday at the 2013 Players when Garcia said Woods distracted him by pulling a club from his bag from across the second fairway, causing the crowd to stir as Garcia swung.

Woods said later he was not surprised Garcia was complaining about something. Woods won the tournament, but the feud spilled over into the BMW PGA Championship more than a week later when Garcia attended the European Tour’s awards dinner and said he would invite Woods over for fried chicken, an off-color remark at best and more sinister at worst.

Once more, Garcia was apologizing.

The back and forth with Woods was more than a decade in the making, but his most confounding losses came to Harrington at the 2007 Open Championship at Carnoustie and 2008 PGA Championship at Oakland Hills.

Woods was far from contention in the former and out with injury in the latter.

Garcia’s coping mechanism at Carnoustie was to blame unseen forces.

“It’s funny how some guys hit the pin and go to a foot,” Garcia said then. “Mine hits the pin and goes 20 feet away. You know what’s the saddest thing about it? It’s not the first time. I’m playing against a lot of guys out there, not just the field.”

At the 2009 Masters, he said he didn’t like Augusta National, calling it unfair and tricky.

“I just come here, play golf and go home,” he said before apologizing through his management company two days later.

His nadir might have come at the 2012 Masters when Garcia seemed to wave the white flag after a Saturday 75.

“I’m not good enough,” he said in an interview with Spanish-speaking reporters. “I don’t have the thing I need to have. In any major.”

This self-defeating talk is heresy to Wadkins.

If he had it for a time, it seems to have been whittled away by time and defeat. Garcia has been one of the game’s great enigmas, playing well enough in a victory at the Buick Classic in 2001 that Scott Hoch declared him as straight and long off the tee as Greg Norman in his prime.

He has been charitable, donating more than one million euros through his eponymous foundation for the disabled and disadvantaged.

Through the bulk of this reporter’s interactions, Garcia has been more than accommodating, one time answering interview questions after four straight rounds in a Players Championship he had no chance to win.

Few people have been more exciting to witness with a golf club or a microphone.

But good luck in the majors has not been his, whether the blame is timing, the golf gods, or his own dark cloud.

“Sergio is a great player but so was Monty and Westwood and others that didn’t win a major,” says Haney, and the weight of his statement hits home.

The line of players who could have won majors goes around the block and then some.

And that carefree teenager racing up the 16th fairway at Medinah is gone.