Remembering the Rory-Tiger show from 2012 Honda 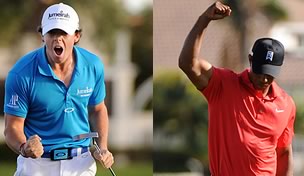 Getty Images
"I have 40 putters in there and I hate every one of them." - referring to the collection of rejected putters he takes on his bus from tournament to tournament  -

Tiger Woods stood on the 13th tee at PGA National, an unforgiving labyrinth of deep bunkers and murky water, and unleashed a bullet draw into the horizon. He turned away from the shot, not even bothering to watch its descent.

“Fairway,” Woods said to his caddie, Joe LaCava, and they walked off the tee.

Woods had begun the final round of the 2012 Honda Classic nine shots behind Rory McIlroy, but now he was making his move. Winless on the PGA Tour since 2009, saddled with questions about his play following scandal and injury, Woods was trying to change the conversation in one afternoon.

McIlroy had his own burden. A win would vault him atop the world golf rankings for the first time in his career. In 2009, also during the Honda Classic, McIlroy and his father, Gerry, had bumped into Jack Nicklaus at a mall in Palm Beach Gardens. The older champion would become a mentor.

Now, three years later, Nicklaus would sit in an NBC booth and watch McIlroy try to become the No. 1 player in the world. Woods, McIlroy’s boyhood idol, would be moving heaven and earth to stop him.

An eagle by Woods on the third hole had put a jolt into his chase. A “low rider” (his words) 6-iron to 10 feet on No. 5 pulled him closer to McIlroy. Woods would go out in 31.

“Just felt normal,” Woods would say later that day. “I was trying to make my way up the board. Didn’t feel any different.”

McIlroy was holding steady – he went out in 34 and bogeyed No. 12 – but he could not ignore the commotion five holes ahead of him. When McIlroy arrived to the 13th hole, Woods was playing the par-5 18th, where a strong drive had left him with a hanging lie in the fairway. Woods jumped all over a 5-iron, sending the ball fading over the water hazard and onto the green 8 feet away.

Just as McIlroy was lining up his putt for birdie, Woods poured in the eagle putt for a round of 62. Somehow, McIlroy steadied himself and rolled in the birdie on top of him to stay two clear of Woods.

“That putt was very important,” McIlroy would say later.

Woods faced the media, comparing his closing eagle to the 6-iron he summoned on the 72nd hole at Glen Abbey Golf Club in Canada in 2000. He ate lunch in the clubhouse and watched the Lakers and Heat on television.

McIlroy had more work to do. From the right of the 14th green, he exhumed his ball from a nasty lie and saved par. On the Bear Trap’s two par 3s – card-wrecking holes framed by water  – he twice found the sand and twice got up and down for par.

His 69 would be enough for a two-shot victory over Woods and Tom Gillis.

In the gloaming, he clutched his trophy and posed for pictures with several Honda Classic officials, a gaggle of youth golfers, and Barbara Nicklaus.

The ceremony over, McIlroy made his way to the clubhouse, where a platter of food sat in the men’s locker room. “Can I steal a cracker?” he asked an attendant and wearily wolfed down a wafer with cheese.

A young boy approached him with a golf ball.

“Great win,” he said to McIlroy, who signed it in large cursive.

McIlroy then signed 21 Honda Classic flags before posing for a photo with two policemen. He hugged his parents, Gerry and Rosie. He hugged his caddie, J.P. Fitzgerald.

“Well done, No. 1,” Fitzgerald said as McIlroy ducked into the back seat of a black Honda Odyssey Touring edition.

One year later, McIlroy would leave PGA National after a mid-round withdrawal on Friday, his confidence in retreat. Woods, too, was off the mark, failing to break 70 in any round, closing with a 74, and finishing tied for 37th.

This week, they return to PGA National with Woods as a No. 1 with questions and McIlroy a No. 8 with momentum.

They return to tackle the Champion Course and, by extension, each other.