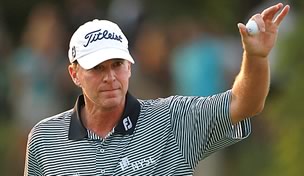 KAPALUA, Hawaii — Steve Stricker went the final five months of the year without a top 10, mainly because of an injury to his neck that caused weakness in his left arm. He decided to treat it with therapy instead of surgery, and so far is pleased with the decision.

Stricker, the highest-ranked American at No. 6 in the world, showed up on Maui feeling good — “real good,” he emphasized.

His physical therapy at home consisted of six massage treatments in a two-week period, and he had his second cortisone shot right before Christmas. Stricker felt as though he were losing power off the tee toward the end of the FedEx Cup playoffs, and that concern remained at the Presidents Cup. But after his treatment, that’s no longer the case.

“Actually, I feel like I’m hitting a little bit further,” he said Thursday. “You look at the way I felt a year ago compared to now, I’m in much better shape.”

Stricker is playing the opening two weeks in Hawaii, then will take a four-week break before returning at Riviera. He said it would be during that month off that he could start working on weights to strengthen his arm.

He turns 45 next month and wonders how fast his window is closing. Then again, he looks at multiple wins in each of the last three years, and doesn’t see any reason why that cannot continue. And while Stricker didn’t have another top 10 since winning the John Deere Classic, it’s not like he was awful.

He was in the top 15 at four of those seven tournaments, and he didn’t miss a cut.

GOLF CHANNEL: The 28 players at the Tournament of Champions are all looking to build off big wins last year.

Golf Channel is no different.

In its first year as part of the NBC Sports Group, the network said it had the most viewers in its 17-year history. Citing data from Nielsen Research, Golf Channel said it had 90,000 viewers watching at any given moment during a 24-hour period, which would include the wee hours of the morning.

Its viewership was up 30 percent from 2010, and was up 3 percent over 2009. That’s significant because Tiger Woods, the biggest television draw in golf, hardly played last year. Woods played a full schedule without any controversy in 2009, winning seven times worldwide. He played the final eight months of the year in 2010.

Last year, Woods went from the Masters in April until the Bridgestone Invitational in August without completing a full round, and he missed all of the FedEx Cup playoffs.

“This viewership record is a testament to the vitality of golf, strengthened partnerships with the game’s governing bodies and the power of NBCUniversal cross promotion,” Golf Channel President Mike McCarley said.

The network gets off to a good start this week at Kapalua. Now that Golf Channel and NBC Sports are under the same ownership, it has allowed for Johnny Miller and Nick Faldo to be in the booth at the same time, and even more credibility comes from Dan Hicks of NBC Sports agreeing to serve as the anchor.

WHAT TO DO WITH $10 MILLION: Bill Haas won the FedEx Cup last year, and $9 million of that $10 million bonus goes right to the bank. What to do with such riches?

Nothing, at the moment.

Haas and his bride, Julie, already were in the process of building a new house.

“We were waffling on whether to put a pool in,” Haas said. “We put a pool in. But we haven’t even broke ground yet, so that could even change.”

Haas then let slip one toy he would love to spend some of his bonus on: a classic Mustang.

“If anybody knows of a `65 to `70 Mustang out there for sale, I really want one of those,” he said. “But until I find one I really want, I won’t make any huge purchases.”

DIVOTS: Johnny Miller is working the Tournament of Champions for Golf Channel (which along with NBC is under the Comcast umbrella). That means he’s taking another week off. Miller said the plan is for him to skip the Transitions Championship outside Tampa, Fla., to be replaced by Tampa resident Gary Koch. … Bryce Molder is to hit the opening tee shot of the 2012 season. He is in the first group with Michael Bradley. Considering the fairway is about 60 yards wide, he should get off to a decent start. … For the last two years, the winner of the Tournament of Champions did not win another event the rest of the season.