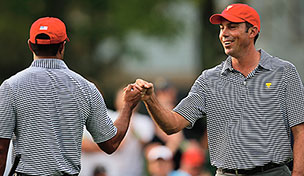 Getty Images
BETHESDA, MD - JUNE 17: Rory McIlroy of Northern Ireland celebrates making eagle from the fairway on the eighth hole during the second round of the 111th U.S. Open at Congressional Country Club on June 17, 2011 in Bethesda, Maryland. (Photo by David Cannon/Getty Images)  -

Phil Mickelson and Keegan Bradley shot 30 on the front nine at Muirfield Village, an astounding performance in foursomes. Only some sloppy play allowed the match to go 15 holes in a 4-and-3 win over Jason Day and Graham DeLaet.

Right behind them, Brendon De Jonge began to emerge as a star of the International team. He teamed with Ernie Els and they never trailed in a 4 and 3 win over Hunter Mahan and Bill Hass, going 8 under when the match ended at the 15th.

The Americans had a 4 1/2 to 3 1/2 lead, though four matches were still in progress when darkness descended on Muirfield Village.

For the second straight day, storms interrupted play and left a bleak outlook for finishing Sunday. Heavy rain – and the time it took to get small pools of water out of the bunkers and fairways – led to a delay of nearly three hours.

The other four matches – the Americans were up in two, the International led the other two – were to resume Saturday morning.

Tiger Woods and Matt Kuchar were 6 under through eight holes and still only had a 1-up lead over Louis Oosthuizen and Charl Schwartzel. Oosthuizen missed a short par putt on the ninth to lose another hole, and the former British Open champion made an even greater blunder on the par-3 12th. After Woods went long of the green, Oosthuizen's 7-iron leaked to the right and hopped into the water. The Americans won with a bogey and were 3 up with six holes to play when they stopped.

Steve Stricker and 20-year-old Jordan Spieth finally seized control of their match when Spieth made a 15-foot birdie putt on the par-3 eighth, and the Texan made another key birdie on the 12th. They were 3 up with four holes remaining.

What looked to be the decisive match of the foursomes session was Angel Cabrera and Marc Leishman, who overcame an early deficit and were 1 up with five holes remaining against Webb Simpson and Brandt Snedeker. The International team had control of the other match. Hideki Matsuyama and Adam Scott lost only one hole and were 4 up with seven holes remaining against Zach Johnson and Jason Dufner.

Saturday is the busiest day for the Presidents Cup, with five fourballs matches early and five foursomes matches late. It concludes with 12 singles matches Sunday, though the forecast is not any better, especially for Sunday.

One thing was becoming clear through the relentless appearance of clouds – the course Jack Nicklaus built has been groomed for birdies.

Nicklaus stood at the back of the press center peering at the scoreboard, and he couldn't believe the scores he saw from both sides. ''They say this golf course is tough,'' Nicklaus said, although he knows better. The greens are among the most pure on the PGA Tour, and they are soft because of the rain. In match play, with 24 of the best players from every continent except Europe, Muirfield Village doesn't stand much of a chance.

Mickelson and Bradley, coming off their first loss in four matches as a team, fell behind early and needed a pair of big putts from Bradley to keep from falling further behind. It took a 15-foot eagle putt by Mickelson just to square the match on the par-5 fifth. But there was no stopping them from there. They followed with three straight birdies and won three straight holes on the back nine with pars.

Mickelson tried to hole out a pitch just short of the 13th green – an up-and-down was all he needed – and it hit the hole and spun 4 feet away. Bradley missed the par putt, bungled the 14th for another bogey and they halved the 15th with birdies.

Even so, they made six birdies and an eagle in 15 holes of alternate shot.

''We played some of our best golf today,'' Mickelson said. ''It just felt terrific.''

De Jonge and Els opened with two quick birdies through three holes and never gave Mahan and Haas much of a chance. They didn't lose a single hole.

The Zimbabwean, in his first Presidents Cup, said Els contributed in his own way.

''Don't let Ernie give me all the credit,'' de Jonge said. ''He's by far the most calming influence I've ever been on the golf course with. It's nice to play with a Hall of Famer who hits it in the middle of the fairway and middle of the green. He makes it very easy.''

The conclusion of the second session could be pivotal for captain Nick Price and his International team, which has lost the last seven foursomes sessions in this event.