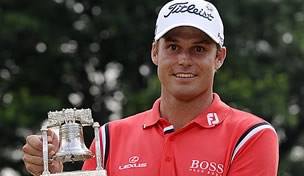 Getty Images
DANVILLE, CA - SEPTEMBER 26: Lorena Ochoa tees off on the 7th hole during the third round of the CVS/pharmacy LPGA Challenge at Blackhawk Country Club on September 26, 2009 in Danville, California. (Photo by Jonathan Ferrey/Getty Images)  -

After being announced, one fan called out, “Go, Rickie!” Several other fans in the large gallery wore bright orange shirts and flat-brimmed caps to show their support for Rickie Fowler, a 22-year-old who was tied for the lead and going after that first PGA Tour win.

“He’s obviously a very popular player. I think his time is definitely coming,” Watney said. “I would say there were probably a few more Fowler fans out there. But it is what it is. Sometimes you play away games or whatever.”

Watney doesn’t have the panache of Fowler, but his game is starting to get plenty of attention.

Playing the weekend at Aronimink in a staggering 12 under, and going the final 27 holes without a bogey, Watney closed with a 4-under 66 for a two-shot victory over K.J. Choi (67) to win for the second time this year and move to No. 10 in the world.

Watney, whose other win this year was a World Golf Championship against an elite field at Doral, also put himself atop the FedEx Cup standings and the PGA Tour money list for the first time.

“It’s a very addictive feeling to be out there and under the gun,” said Watney, who had rounds of 62-66 on the weekend. “To be able to hit good shots and putts is why I play, really.”

And to think that with only 27 holes left in the tournament, Watney was trying to keep from getting left behind. Ten birdies, an eagle and no bogeys later, he was posing with the silver trophy of a Liberty Bell and wondering how much better he could get.

Charles Howell III earned quite a consolation prize. He played bogey-free in the final round for a 6-under 66 to tie for third with Adam Scott (68) and Jeff Overton (67). That made him eligible for the British Open in two weeks as the top finisher from the top five who wasn’t already exempt.

Fowler had another learning experience.

He fell out of the hunt early with a double bogey on the second hole when he hit three straight shots without losing his turn. From a tough spot in the bunker, he came up well short of the green, barely got his putt up the slope, then ran his bogey attempt a nervy 3 feet beyond the hole. That became a three-shot swing when Watney made birdie, and Fowler never caught up. He finished with a 74 to tie for 13th.

“I just couldn’t get anything going today,” he said.

Watney didn’t give anyone much of a chance. He took the outright lead with a wedge into 10 feet for birdie on No. 2, and holed a 20-foot birdie putt on the par-5 fifth. Despite leaving himself in a tough spot in the bunker on the par-5 ninth, he blasted out to 2 feet for another birdie.

Even so, his biggest putts were for par.

Watney saved par from bunkers on No. 4 with a 20-foot putt, and from No. 7 with a putt from about 12 feet. His biggest par save might have been the par-3 eighth, which yielded only two birdies in the final round.

Overton had reached 9 under and was making a move, and Choi had birdied the previous to also reach 9 under. Watney’s shot went over the green, and he putted up the slope to 18 feet. He made the par putt to keep his cushion.

“That was big not to drop a shot after hitting a good shot, and keep momentum heading to the back nine,” Watney said.

The final challenge came from Choi, who trailed by four shots at one point. He slowly made up ground, then closed in on Watney after the turn with a bending, downhill birdie putt on the 11th and a pair of long birdie putts on the 12th and 14th holes, the last one tying for the lead.

Momentum was with Choi, only the South Korean knew better. The par-4 15th played at 503 yards into a slight breeze, following by the par-5 16th that was reachable in two.

“When I tied him on the 14th hole, I knew that there was still a lot of holes to go, and I knew the remaining holes were more favorable to Nick Watney,” Choi said. “I knew the 15th hole would be a turning point. That was a key hole, and I missed it. So I think that was the turning point of the match.”

Choi pulled his shot into the left rough, then tried to hit 5-wood toward the green. The thick grass shut his club and sent the shot into a bunker, some 60 yards from the pin, and so close to the side that his legs were pressed against the edge of the bunker. Choi hit a solid shot, but it took one more hop into the rough, he chipped out to 12 feet and missed the putt.

Watney was just short of the green and lagged his putt from 75 feet to 5 feet, converting yet another important par.

On the next hole, Watney used his power to smash a drive that left him only a 7-iron to the green, and he again hit a good lag for a two-putt birdie. His seventh and final par save came from just behind the 17th green, and his chip stopped 2 feet from the cup.

Watney earned $1.116 million and became the first player this year to top $4 million on tour.

“I’m overjoyed to be in here as the winner,” Watney said. “It was a very difficult, long day. K.J. played great golf and he kept coming and coming. And that makes it even more rewarding.”