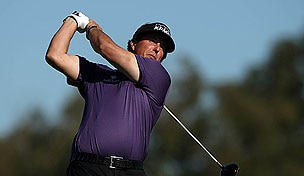 Getty Images
PACIFIC PALISADES, CA - FEBRUARY 20: Ben Curtis hits his approach shot on the fifth hole during the second round of the Northern Trust Open on February 20, 2009 at Riviera Country Club in Pacific Palisades. California. (Photo by Stephen Dunn/Getty Images)  -

SAN DIEGO – Spencer Levin and Kyle Stanley knew they had to post low scores on the easier North Course at Torrey Pines to get off to a good start Thursday in the Farmers Insurance Open, and did even better than they expected.

Stanley made eagle on his final hole for a 10-under 62, his best score in two years on the PGA Tour. Levin shot 29 on the back nine and had a 62, matching his career best on Tour, as they claimed a share of the lead after the first round.

“I played the pro-am on the North Course yesterday. There were just a lot of birdie opportunities out there, so I knew there was a good score – maybe not 10 (under), but I’ll take it,” Stanley said.

They were a shot ahead of Bill Haas, who had a double bogey on his 15th hole and still managed a 63. The top 12 on the leaderboard played the North, which played slightly more than 3 1/2 strokes easier than the South Course, which hosted the U.S. Open four years ago.

The best score from the South was Marc Turnesa at 66.

Phil Mickelson, meanwhile, went south on the South. The three-time champion hit into 11 bunkers, missed a 3-foot birdie putt on the final hole and signed for a 77. It was his highest score at Torrey Pines since a 78 in the third round of 2005.

“I made some bad swings just in the wrong spot and so forth,” Mickelson said. “I felt like my game was ready heading in, and I don’t know what to say about the score. Because it was pathetic.”

A year ago, the fairways were pinched in and the rough was unusually high on the North Course, helping to make up for the 604-yard difference between the two courses. Based on the scores, that’s no longer the case.

Of the 54 players who shot in the 60s, only 13 of them were on the South Course. One of them was Paul Goydos, who doesn’t buy into the theory that with two vastly different courses and said the tournament really doesn’t start until Saturday when everyone has played both.

“Ten under is leading the tournament, and anyone who says differently is full of it,” Goydos said. “I looked at the leaderboard.”

He would argue that some players simply have better vibes on the different courses. What might be a big difference to one player might be much less to another.

“All I know is that I’m six shots back and I’ve got to deal with it,” he said.

Levin noticed only one big change in his game, and that was putting the ball in play. That made quite the difference, setting up short irons and plenty of birdie opportunities.

“I had some putts for birdies instead of pars, and kind of added up to a good score,” Levin said.

The turning point came when Levin thought he might make bogey. He drove into the bunker on No. 7, leaving him an uphill shot to a difficult green, blocked partially by a tree.

“I was thinking I wouldn’t have a shot. I was thinking it’s probably going to be a bogey, and I’ll go back to even (par),” Levin said. “I cut an 8-iron around and go on the right side of the green and hit a 20-footer – it probably broke 10 feet – and I made it. So it felt like at least a one-shot swing.”

He followed with a birdie on the par-5 ninth, and making the turn at 3 under instead of 1 under changed everything for him. 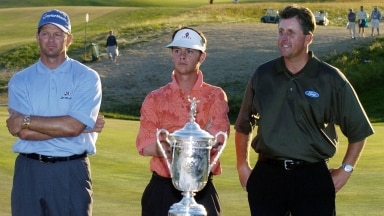 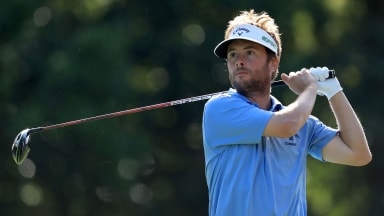 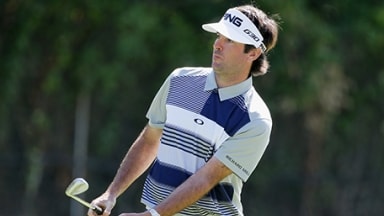