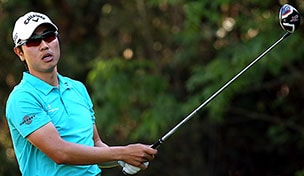 LOS ANGELES – Sang-Moon Bae is off to another great start at the Northern Trust Open. The next step is a better finish.

Bae played bogey-free Friday on another gorgeous day at Riviera for a 5-under 66, giving him a one-shot lead over Aaron Baddeley and Robert Garrigus going into the weekend.

Baddeley, who hasn't won since Riviera three years ago, birdied his last four holes for a 65. Garrigus played in the afternoon, when it's a little more difficult to make putts, and managed just fine with a 67.

The 27-year-old South Korean was tied for the lead going into the weekend at Riviera last year. Bae struggled to a 76 in the third round and never got back into contention.

''It was really, really good experience, and I learned a lot,'' Bae said. ''I improved a lot from last year.''

He wound up winning the Byron Nelson Championship a few months later for his first PGA Tour victory.

Patience surely will be required at some point over the weekend on what has shaped up as one of the best weeks of weather at Riviera - an abundance of sunshine and only a trace of wind. Despite what would appear to be pristine scoring conditions, no one has reached double digits under par this week, a testament to one of the best golf courses on the PGA Tour.

''It's a strong course, especially when it's dry and firm like it is,'' Baddeley said. ''If you miss it out of position, it's really hard to get the ball up and down. Today was good, because I made a couple good saves but coming in, I had some good looks and made them.''

And while Bae is in the lead, the tournament remains wide open, with 22 players separated by only five shots.

One of them is Dustin Johnson, who led after the first round and opened with two quick birdies. Johnson never made any more progress, however. He dropped shots on the 12th and 15th holes to negate a few more birdies, and missed several good looks inside 12 feet. He had to settle for a 70 and was three behind at 6-under 136.

''I played pretty solid today, just hit a couple of bad drivers on the back. But that's going to happen,'' Johnson said. ''But I still had a lot of really good looks at birdie and just couldn't capitalize on any of them.''

Also three shots out of the lead was Jim Furyk, who had a 68.

Among those missing the cut was Matt Kuchar, who failed to qualify for the weekend for the first time since the 2012 PGA Championship. His streak of 30 straight cuts was the longest active on Tour, though still far behind the record 142 by Tiger Woods.

Baddeley was in the middle of the pack until he hit his approach on the 15th hole to about 8 feet. He followed with a short birdie putt on the par-3 16th, rolled in a birdie putt from 15 feet on the par-5 17th and finished it off with a 25-foot birdie on the 18th.

Garrigus has made the cut only once in four previous trips to the Northern Trust Open. He decided to bring a new attitude, and it seems to be working.

''I have pretty good willpower, so as soon as I stepped on the first hole this week, I'm like, 'I absolutely love this place.' ... And I'm really starting to like it,'' Garrigus said.

He also figured it would be one last chance to get into the Match Play Championship next week, though someone will have to break the news to him that the Match Play field is closed. Garrigus won't be playing even if he wins.

Jordan Spieth managed to get in the mix, especially after he was on the cusp of leaving early.

The 20-year-old Texan had tough par putts on four straight holes at the start of his round. When he finally missed one on the fourth hole for his first bogey, he took off. Spieth birdied four of his last five holes for a 66, leaving him in the large group that was at 4-under 138 along with Keegan Bradley and Jimmy Walker, still in the hunt for his fourth win this season.

''I putted great today, a lot of par saves on the front,'' Spieth said. ''I could have been 4 or 5 over at the turn, and instead I was at even, so very happy with the finish. Back in contention.''

Not so fortunate was Fred Couples, who had a tiny cut on the tip of his left thumb that opened up to the size of a dime, making it difficult for him to hang on to the club. Couples has gone his entire Hall of Fame career without wearing a glove.

Asked if it bothered him, he said, ''Yeah. I couldn't hit the ball.'' Couples made his 32nd appearance in this tournament, but at 2-over 144 was certain to miss the cut.